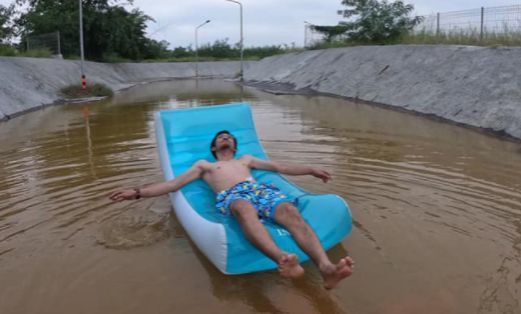 A flooded underpass in the Non Sung district of Nakhon Ratchasima has finally been drained after locals posted photos of them pretending to turn the area into a tourist attraction and swimming pool.  The State Railway of Thailand waited for almost a month before draining the water after the area was flooded by heavy rain.

Jitiwat Nakchamsilp came up with the idea to publicise the problem as he and another man posed lounging in inflatable lilos on the water. The Facebook post on Friday went viral and was eventually noticed by the SRT.

“I decided to post it to get the attention of the SRT. People here have nobody to turn to.”

The underpass comes under the SRT’s jurisdiction as it was built for the safety and convenience of residents who live near the Nakhon Ratchasima-Nong Khai line. However, with it being submerged with water, locals were forced to travel several kilometres to cross the tracks.

In response to the viral post, the railway agency said the soil was blocking the pipes.

“The SRT would like to apologise for this inconvenience.”