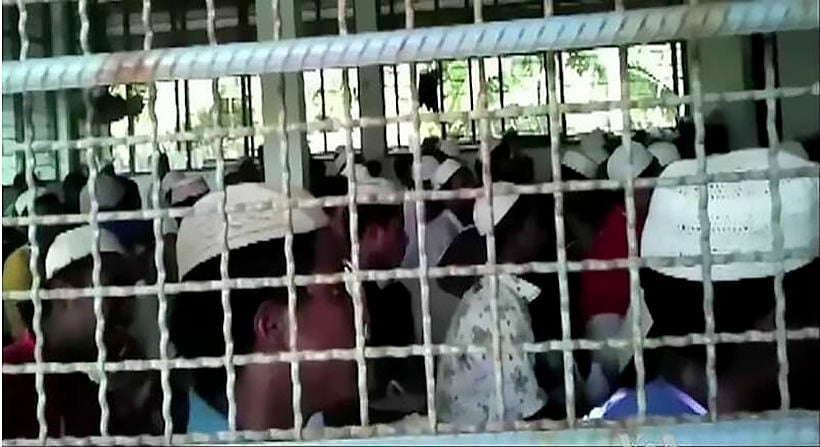 There are 26 Rohingya women in a cramped detention facility in the Deep South province of Songkhla, on the Malaysian border, and the the Immigration Bureau wants them removed for fear they’ll become infected with the Covid-19 coronavirus. The Rohingya are a stateless, mainly Muslim ethnic group from the Rakhine state in Myanmar. They have been persecuted for years and hundreds of thousands have been killed or displaced.

The proposal was made as Deputy PM and Public Health Minister Anutin Charnvirakul yesteday led an inspection of the centre, which has been turned into a makeshift hospital since 42 illegal migrant workers and 2 immigration officers tested positive there last week.

The Public Health minister has been relegated to touring the outer provinces for photo opportunities after some cases of ‘mis-speaking’ when addressing the media, in the early days of the local Covid-19 outbreak.

Police say the detainees should be moved to another facility in the province’s Hat Yai district to help prevent a second outbreak at the immigration centre, which is in Sadao district. The 26 Rohingya women are currently held on the second floor of the centre, which critics claim could put them at high risk of getting the disease.

“The detention area is too small to implement social distancing guidelines.”

The outbreak has alarmed the government as it caused the daily number of new cases in the province to spike last Saturday after several days of low numbers.

The migrants in the centre comprise 34 from Myanmar, 3 from Vietnam 2 from Malaysia and 1 each from from Yemen, Cambodia and India, according to the Centre for Covid-19 Situation Administration. 36 of them are being treated at the makeshift hospital while 6 others, including a pregnant Burmese worker, have been admitted to hospital, according to police.