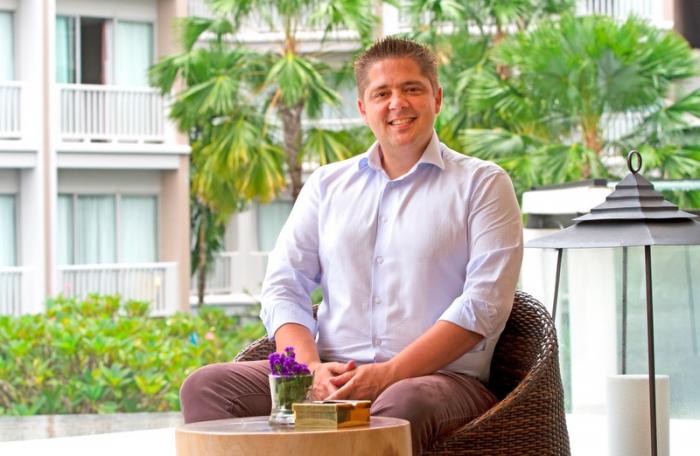 PHUKET: Hailing from Marseille, France, 38-year-old Sebastien Tronchet is the General Manager of the Grand Mercure Phuket Patong. He is no stranger to the land of smiles; he took his chances in Thailand 15 years ago and never looked back. His only regret is that he didn’t take the leap 10 years before he did.

With a bachelor’s degree in law and accounting, a master’s in hotel management and international tourism, and an aptitude for learning Thai language, Sebastien was able to settle into the managerial seat with aplomb.

“Learning to speak Thai has helped me professionally as well as personally. It’s good to be able to chat with locals and gain a deeper understanding of the culture here,” he says.

Born and raised amid a multicultural mix of nationalities in Marseille, he recalls that he was not always this easy going.

“As kids fresh out of college, my friends and I just wanted to be directors and managers at some big company,” says Sebastien. “When I came here, however, I noticed that things were done at a much slower pace and that I actually liked it better.”

With several high ranking hotels on his hospitality resume – including Sofitel Hua Hin and Novotel Siam in Bangkok – Sebastien learned to deal with a multitude of problems, the likes of which he’d never encountered before.

From dealing with four-meter-long snakes in the hotel garden to power outages inconveniencing guests, he mastered the ropes of hospitality and guest management. The Grand Mercure Phuket Patong is, however, his first experience of working in Phuket.

“When I first came to work here, there was a lot of work to be done. I implemented some creative ideas and worked closely with the owners regarding interior design, restaurant and spa concepts, as well as fulfilling the needs of the vast variety of guests that we deal with on a daily basis,” says Sebastien.

“We have Indian guests who want vegetarian food, Muslims who want Halal cuisine, Europeans who want a traditional English breakfast, and so on. We have to learn to cater to every guest’s needs. That is what we are best known for – caring about our guests and going out of our way for them.”

There is no room for error in hospitality, Sebastien says.

“Not everyone gives you a second chance if something goes wrong. I brought in young trainees who speak Chinese, Japanese, French and Korean, in order to cater to everyone’s needs as swiftly as possible. Communication is key when working in this field,” he says.

Sebastien aims to bring back the vibe of the ‘good old days’ to hospitality.

“When I first started out in hospitality, I noticed that my hotel staff was deeply attached to the guests and had a special bond with each and every one of them. That is the kind of service I wish to provide,” he says.

Outside of the office, Sebastien appreciates all that Phuket has to offer.

“I love that you can go from a Nepalese guy selling you a suit to a Lebanese guy making kebab, to a Thai Muslim selling you chicken. We have beaches, mountains, museums and so much else that you may not even get to see it all before leaving the island,” he says.

He has a message for anyone who wants to accomplish something in life.

“People will say you’re too old or too young – that’s been the story of my life,” says Sebastien. “You need to work hard, of course, but sometimes you need to take a step back and breathe. I had a ‘difficult’ attitude as a kid, but over time I have learned when to speak up and when to hold my tongue. It’s that understanding that has helped me get where I am today.”

Profile: Edwin Wiek and his love for animals