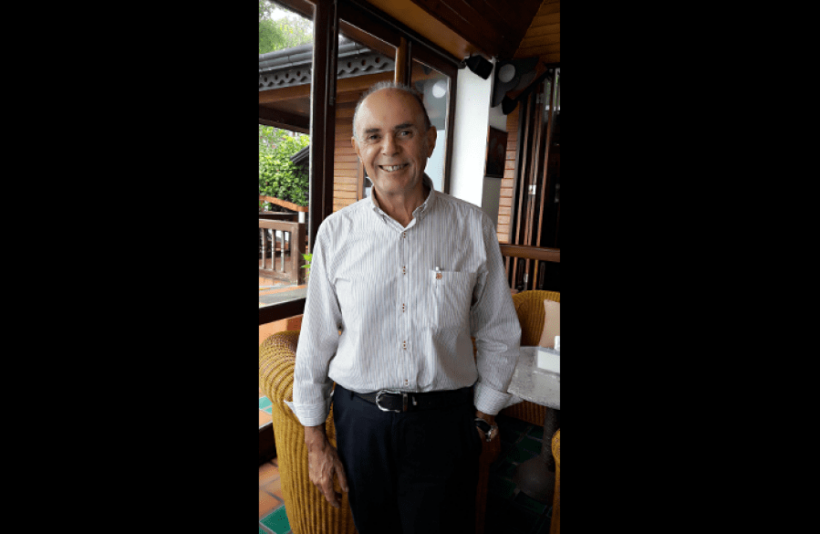 PHUKET: Georges Ciret is currently the Wine Director at Mom Tri’s Villa Royale in Phuket. With more than 40 years of experience in wine making and hospitality, he brings unique skills to the craft that few others could boast of.

“We have a big collection at Villa Royale, with more than 300 labels from all over the world. We always keep people’s preferences in mind though, so we offer options for everyone – organic, vegan and even wine with braille labels,” says Mr Ciret.

“Some of them may be expensive, but there are also more affordable ones so everyone can enjoy what we have to offer. I’m not happy when people stay at Mom Tri’s and order beer, for example. We now offer wine by the carafe, which is something we never did before. People’s preferences have changed and I have changed with them,” he adds.

Mr Ciret was born in Paris where he worked at his parents’ wine shop.

“I had a very early start in the business. I worked in the wine cellar for three months and then moved to the restaurant. After a little while, I joined the navy. When I completed my service, around 1972, the Accor group opened up a Sofitel with more than 800 rooms in Paris. I joined the hotel and worked there in various capacities, including restaurant manager and general manager. The first seven or eight years I worked in Paris, and then at Accor hotels all over the world,” he says.

During his 31 years with Accor, he met presidents, served many important guests and brought several new and innovative ideas to the company.

In 2003, he parted ways with them and moved to Phuket where he bought a guesthouse in Patong. Life had other plans for him, it seems, and in Phuket he met the general manager of The Boathouse Phuket, who recruited him for his wine expertise.

“At that time, they had more than 700 labels and I taught and trained the staff about the wine. During the tsunami, I lost 70 per cent of my inventory and we had to close down for four months. We then built a new wine cellar and, in 2006, won the ‘Wine Spectator Best in Thailand’ award, the only one in the country to win it. Since then, we have won multiple prestigious awards,” he says.

“I’ve been with Mom Tri since 2006, taking care of a number of different properties and serving as the wine director. My job is to teach and train the staff as well as to host events. At least once a month, we try to organize wine dinners with different companies who come to Phuket and present their wine,” he explains.

Mr Ciret meets with winemakers from all over the world – Tuscany, Italy, New Zealand and so on – and works closely with the chef to come up with a menu that perfectly complements the wine at each dinner.

“I always look for prestigious wineries. We have a reputation and I want the wine to meet our quality standards. There are various factors we use to judge the prestige of the wine – where it was grown, whether it is hand produced or factory produced, the history and tradition of the wine – all this determines whether we choose to work with the label or not.”