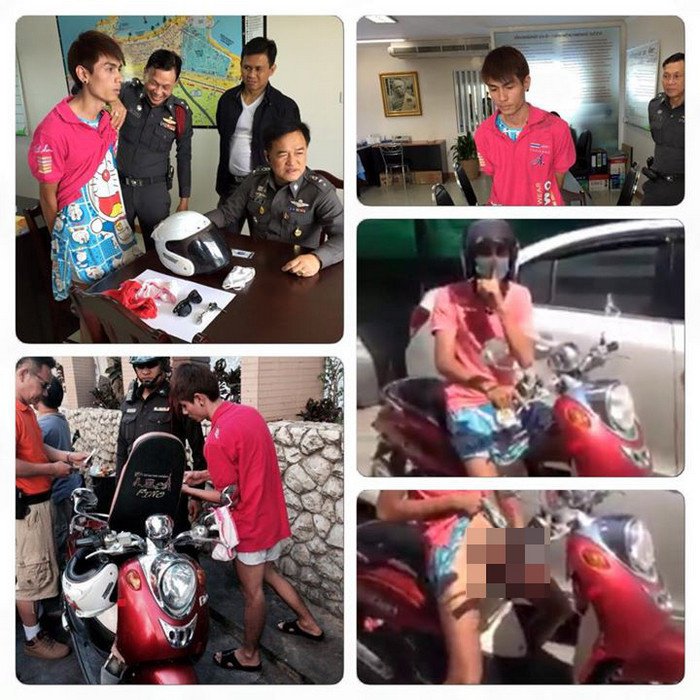 PHUKET: Police in Pattaya have tracked down and arrested a man who donned a Doraemon dress and masturbated in public while parked outside stores in the bustling seaside resort town.

Police were alerted to the man’s antics after a video posted on Facebook went viral. The video shows the man in his Doraemon dress, safety helmet and surgical mask, rolling up on his motorcycle in a quiet side street beside Apichart Beauty Clinic, pulling out his magical wand and beginning his onanistic act.

Determined to get their man, local officers began their hunt for the “Dirty Doraemon”. On January 9, they posted their successful conclusion on their Facebook page, dubbed Thailand Police Story.

“We received a tip-off from local residents that the man had exposed himself again – this time on Soi 6/1, off the Pattaya Beach Road,” Lt Col Phumisit Singtueng of the Pattaya City Police explained.

“We rushed to the scene, where we easily identified the suspect by the Doraemon dress he was wearing.”

In making the arrest, officers also found women’s underwear under the motorcycle seat.

“It’s like I have some mental problem. Every time I wear the Doraemon dress, I want to pull my thing out.”

Officers then called Mr Jetpinit’s parents to the police station to claim their son, and asked them to find some way for him to receive treatment for his condition.