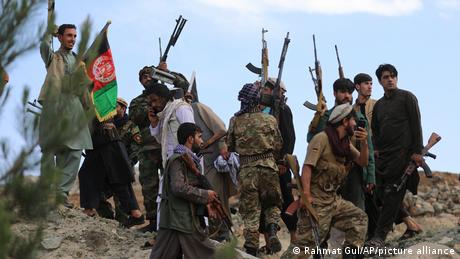 The insurgents now control two-thirds of the Afghan-Tajik border, the Russian Foreign Ministry said on Friday, adding that they were also able to capture key economic centers on the border with Iran.

Earlier this week, Taliban fighters launched an assault on the provincial capital of Qala-e-Naw, their first bid to seize a large city since the US started withdrawing its troops.

Experts say it is just a matter of time before the Taliban advance toward the capital Kabul.

But US President Joe Biden is optimistic that the Afghan army is capable of countering the Taliban offensive. He told reporters in Washington, D.C. that it is not “inevitable” that the Taliban will take over the country following the US pullout.

Limited options for the Afghan government

It is becoming increasingly difficult for President Ashraf Ghani to hold on to power, despite Biden’s assurance to him that the US will continue to back his government.

At the same time, Biden said on Friday that “Afghan leaders have to come together and drive forward a future.”

“We did not go to Afghanistan to nation-build,” Biden said.

The peace process following the 2019 US-Taliban deal in Qatar has failed to yield the desired results. The intra-Afghan talks have stalled, with both the government and the Taliban blaming each other for the impasse.

President Ghani feels he has fewer options in this situation. His government is now turning to warlords and influential tribal figures for support, to help Kabul put together anti-Taliban militias.

Afghan officials, including new Defense Minister Bismillah Mohammadi, are calling on the people to join the fight against the Taliban.

“People have taken matters into their own hands by picking up arms to support their security forces against the Taliban,” Fawad Aman, the deputy spokesman for Afghanistan’s Defense Ministry, told DW, adding that the local support has helped Afghan security forces push back the Taliban in many areas.

Dangers of arming the citizens

Some Afghan experts, however, see a risk in arming the local population against the Taliban.

“This could prove effective in the short term, but these armed groups could become a problem for the country in the future,” Assadullah Nadim, a Kabul-based security analyst, told DW.

Armed citizen groups, according to Nadim, could change allegiance once they realize that their interests are better served by supporting other stakeholders.

“Influential Afghans, warlords and local leaders are leading an anti-Taliban campaign,” the expert said, adding that they could turn their back on the government anytime.

Nadim said the government should instead focus on strengthening the Afghan military.

Nasratullah Stanakzai, a lecturer at the University of Kabul, said the government needs to bring local militias under the Afghan army control to better manage them.

The warlords and tribal leaders behind these local militias are also accused of human rights violations.

Ahmad Saidi, a Kabul-based analyst, is of the view that Ghani needs to manage these local militias lest “they could be used as proxies by other regional countries.”

Afghanistan descended into total chaos after the occupying Soviet forces left the country in the late 1980s. A civil war ensued, with regional powers backing different warlords and militias to capture Kabul.

Thousands of people died in the conflict, with the Taliban, allegedly backed by Pakistan, finally seizing Kabul in 1996.

Experts fear that the withdrawal of NATO troops would unleash a similar crisis in Afghanistan.

“The Taliban are emerging victorious not just in their traditional areas in the south of Afghanistan, like Kandahar or Helmand, but also in northern districts such as Mazar-e-Sharif. The government forces seem to be on the backfoot, while warlords are re-arming to fight the Taliban,” Ahmed Rashid, a Pakistani journalist and best-selling author of several books, including “Taliban: Militant Islam, Oil and Fundamentalism in Central Asia,” told DW in an interview.

“It’s an extremely dangerous situation that can suck in the neighboring countries. If that happens, that will be the end of Afghanistan,” he added.

Michael Kugelman, deputy director and senior associate for South Asia at the Washington-based Wilson Center, said that “Afghanistan is already embroiled in a civil war.”

“Even as anti-Taliban militias are rising, the government in Kabul remains weak and unpopular. The question is not whether Afghanistan is facing the prospect of a civil war; the question is that how much worse the existing civil war can get,” Kugelman told DW.