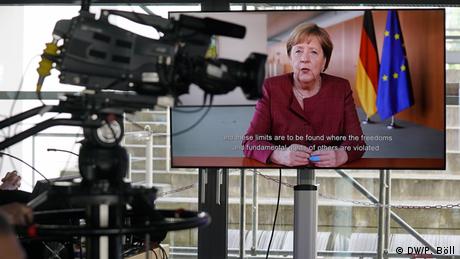 The COVID-19 pandemic is shaping the start of this year’s Deutsche Welle Global Media Forum (GMF), which opened on Monday with a hybrid launch event held partly on site at DW’s broadcasting center in Bonn, and partly online with guests appearing via video link.

German Chancellor Angela Merkel began proceedings by addressing participants in the two-day event, which included delegates from more than 120 countries, with one such on-screen message: “In democratic societies, where we are open to new developments,” Merkel said, “we must also always conscientiously consider what freedom means to us in concrete terms and how we protect freedom and fundamental rights.”

In his own introductory remarks, DW Director General Peter Limbourg underlined how press freedom has come under pressure in Europe – particularly under the dictatorship of Alexander Lukashenko in Belarus. “What is happening in Belarus is a disgrace for Europe, and it would not be possible without the massive support of the Russian government,” said Limbourg. “Like all autocrats, Lukashenko and Putin want a press that always praises them.”

Participants at this year’s GMF include Belarusian opposition leader Sviatlana Tikhanouskaya, who has been living in Lithuania since the country’s rigged elections, as well as leading US professors including Timothy Snyder, whose research has shed light on autocratic developments in Eastern Europe.

Exchange between global north and south

Limbourg also drew attention to the recent conviction of Belarusian journalist Alexander Burakov, who was sentenced to 20 days in prison after reporting on a court case for DW. “When it comes to freedom of the press and freedom of expression, we have to take a clear stand,” Limbourg said — and do so “all over the world.” Because of the pandemic, exchanges between the world’s highly industrialized countries and the global South must be intensified even more, Limbourg added.

In the wake of the pandemic, he called on media makers from around the world to work harder on “solution-oriented journalism,” saying that was what users in the digital world expect from journalists today.

This year’s Deutsche Welle “Freedom of Speech Award” went to 33-year-old Nigerian journalist Tobore Ovuorie, who uncovered the trail of human traffickers who force women from Nigeria into prostitution, including in Europe. Her discoveries took place over months of research, some of which was undercover and put her life at risk, and led to Nigerian authorities launching investigations against the perpetrators.

Free information in the pandemic

The crisis created by the coronavirus, one and a half years after SARS-CoV-2 was first reported in Wuhan, China, has possibly already changed the media worldwide more than many could have imagined.

That was also shown in the remarks made at the GMF by the two leading chancellor candidates in September’s German election: The global pandemic, “which took us by surprise and made it very clear how interconnected this world is,” showed the importance of deeply researched journalism, saidArmin Laschet, state premier of North Rhine-Westphalia and leading candidate for the Christian Democratic Union (CDU), in his speech at the GMF opening. “If a virus spreads somewhere, it can affect people all over the world,” he said.

A global response was needed, he said: “It is not enough for the rich countries of the North to vaccinate themselves, but a large part of the world has no vaccine.”

Laschet welcomed the decision of the G7 summit over the weekend to make vaccine available to the world. The heads of state and government of the world’s former seven largest industrialized nations had agreed to supply 1 billion vaccine doses for the world’s poorest countries.

The World Health Organization (WHO) estimates that 11 billion doses will be needed by the end of 2022. The Green party’s candidate for chancellor, Annalena Baerbock, said in a previously released statement to the Global Media Forum that “The freedom of speech and the freedom of the press have been under pressure since a long time and before the onset of the coronavirus pandemic. But the pandemic has reinforced and intensified repressive tendencies worldwide.”

The first discussion forum on Monday included a few suggestions for ways in which the GMF could point to a post-pandemic journalism.

Harvard professor Steven Pinker had his own diagnosis of the problem: In today’s world of fast digital information, the media is too often driven by breaking news reports of disasters and new crises. That has consequences for the psyche of many media users, the renowned researcher said, while also obscuring the view of many positive realities in the world that can be learned from. “We should be much more aware of trends in a statistical context,” Pinker said. For example, he added, poverty in the world has declined massively over the past 200 years.

Whereas 90% of humanity once lived in extreme poverty, today that number is down to 9%, he said. Even if the 700 million people affected are still far too many, in order to be able to help them, the focus must be on development. War casualties have also dropped drastically, he added. The increase in life expectancy to over 80 years in Europe and North America is also a positive development that must be placed in the context of current crises, Pinker concluded.

Myanmar: Time running out for NGOs to avoid humanitarian catastrophe