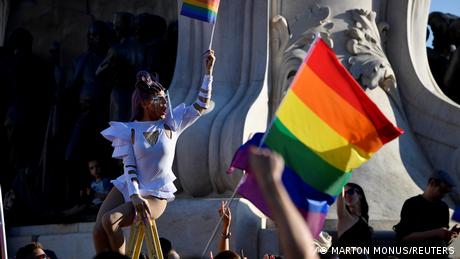 Members of the European Parliament are set to vote overwhelmingly in favor of a resolution demanding the EU fast-tracks legal action against Hungary over its new anti-LGBTQ law.

During a debate on the issue in Strasbourg, German Green MEP Terry Reintke said “democracy, fundamental rights and the rule of law are dismantled inside the EU before our very eyes.”

The text is expected to call on the EU’s executive arm, the European Commission, to start a process which could eventually lead to Hungary losing its vote at the EU table or for EU funds to be prevented from going to the country.

European Commission President Ursula von der Leyen said they would use “all the tools in the toolbox” to ensure fundamental rights are protected.

Hungarian Prime Minister Viktor Orban’s new legislation bans any so-called promotion of LGBTQ lifestyles or values. The measures come into effect on Thursday and will forbid teachers from educating children about gay relationships or for normalized LGBTQ relationships to be shown on TV.

The law is similar to one which came into force in 2013 in Russia which has been used to significantly crack down on LGBTQ rights and freedoms.

The Orban government insists it is an “Anti-Pedophile Law” which allows parents to educate their children about sexuality in the manner they choose.

As one of the measures to put pressure on Hungary, MEPs want the EU to restrict funds from the EU budget and the recently agreed COVID-19 recovery fund from going to Budapest until the Hungarian government changes its ways.

Experts in EU law do warn however that it would be difficult in this case.

“To trigger that rule you have to have a direct link to the spending of EU funds in the legal complaint – this doesn’t exist in the anti-LGBT law,” Daniel Hegedus, policy fellow at the German Marshall Fund, told DW.

He does, however, call this new Hungarian law a “game-changer” for the EU.

“The perception was always that Orban was tinkering around with rule of Law and democratic checks and balances, but not that he was creating systemic widespread suppression and discrimination as this law does,” said Hegedus.

The European Parliament resolution also reminds national governments in the European Union that they can take individual action against Hungary by launching cases against breaches of EU law in the EU’s top court, the European Court of Justice (ECJ).

There have been attempts to do this at the start of this year.

Both governments did not act on their parliaments’ demands.

In Strasbourg, Irish EPP MEP Maria Walsh told DW that, “the European Commission is pulling its weight, the European Parliament is doing its job, now it is absolutely time for the EU governments to step up and take affirmative action.”

‘No place in EU for anti-LGBT law’

The new law was voted through the Hungarian Parliament just ahead of the last EU summit of leaders in July.

It prompted Dutch Prime Minister Mark Rutte to say there is “no place in the EU for Hungary with such an anti-LGBT law.”

Initial steps against a country in breach of EU law under Article 7 of the EU treaties can be approved by a vote of 4/5 member states (22 countries in total) especially in cases where that breach is expected to happen.

However, in order for serious action to be taken there needs to be unanimity among all other 26 EU countries.

Poland, which is also under Article 7 infringement procedures over its political infiltration of the judiciary, is blocking that harsher step — a favor returned by Hungary.

Elections are on the horizon

LGBTQ organizations in Europe back the European Parliament resolution but they warn against “falling into the trap of an us-vs-them narrative,” Katrin Hugendubel, advocacy director at the European branch of the International Lesbian, Gay, Bisexual, Trans and Intersex Association (ILGA-Europe), told DW. “Viktor Orban is trying to split society further, to rally up his supporters, despite studies in Hungary showing there is a growing awareness and acceptance of LGBTQI people.”

Sources in the European Parliament have also told DW that while the major political groups are all voting in favor of the resolution, they do fear polarization.

Hungary is set hold elections before the spring of 2022, and picking fights with the European Union has proven a successful campaign tool for Orban and his Fidesz party in previous ballots.