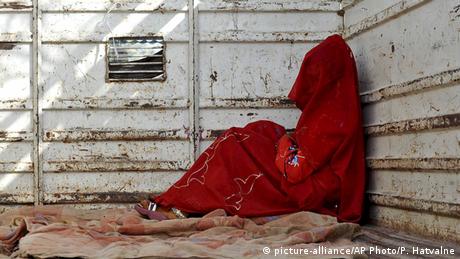 Neelam, a 15-year-old girl in Murshidabad, got married in May just days before Cyclone Yaas hit the West Bengal state in eastern India. Already under pressure because of the pandemic, her family decided to marry her off knowing that the cyclone would further damage their livelihood.

West Bengal is one of the five states in India that have a high prevalence of early marriages. Though 12% of girls between 15 and 19 years of age are married off nationally, in West Bengal the figure stands at 25.6%.

“Many families in the state depend on daily wage work, but COVID has deprived them of that. Food insecurity is prevalent, and the financial situation is dire,” Baitali Ganguly, who works at the Jabala Action Research Organization in Kolkata, told DW.

The child rights organization says there has been an alarming increase in child marriages in the state, especially in rural areas.

“We have tried to stop several such marriages during the pandemic. In some cases, we have succeeded, but a lot more needs to be done apart from the NGO interventions,” Biplob Mandal, a rights activist, told DW.

In southern Telangana state, distress calls to child safety helplines have increased manifold, with many girls seeking help from state authorities. They say their parents are forcing them to get married.

From February 2019 through March 2020, the government-run Women’s Development and Child Welfare Department averted 977 child marriages in the state. Since the start of the pandemic, the number has increased to 1,355.

“It is the official figure; imagine how many cases have gone unreported,” Srivyal Vuyyuri, director of Sphoorti Foundation, a nongovernmental organization, told DW.

India was recording more than 400,000 new coronavirus infections per day at the height of the second wave in April and May. Despite a decrease in the number of new COVID-19 cases and the easing of restrictions, experts are warning that the country still has a long way to go to effectively prevent the spread of the virus.

Along with Niger, Guinea, South Sudan, Chad and Burkina Faso, India is one of the few countries in the world where child marriage continues to enjoy wide social acceptance.

Poverty, weak law enforcement, patriarchal norms and concern about family honor are factors contributing to early marriage. Despite reports suggesting that child marriage is on the decline in the country since 2001, the 2011 census report revealed that child marriage is rampant, with almost one in every three married women being below 18 years. The problem is particularly acute in rural areas, where two-thirds of the Indian population lives.

India has 70 districts that report a “high incidence” of underage marriages. These districts are spread across 13 states, which account for 21% of the country’s child marriages, according to IndiaSpend, the country’s first data journalism initiative.

There is gender discrimination inherent in child marriage, as the practice is more prevalent among girls than among boys. It also violates child rights — cutting across every part of women’s development and creating a vicious cycle of malnutrition, poor health and ignorance, experts say.

Though the government enacted the Prohibition of Child Marriage Act in 2006 to prevent child marriages, as opposed to only restraining them, the reality on the ground is completely different. According to the National Commission for Protection of Child Rights (NCPCR), India’s highest child rights body, underage marriages, especially of girls, are rising even in urban places in India.

“The number of child marriages has skyrocketed during the pandemic. We believe it is driven by poverty, insecurity, gender inequalities and an inadequate implementation of the law,” Enakshi Ganguly, a child rights activist, told DW.

Rights groups say economically disenfranchised parents tend to resort to child marriage to escape the financial burden of caring for a girl.

“Child marriage leads to a range of devastating consequences. It is taking place in both urban and rural areas, where girls are not encouraged to study,” Indira Pancholi, founder of the Mahila Jan Adhikar Samiti, a Rajasthan-based organization fighting for female empowerment, told DW.

Activists say underage marriage denies girls their fundamental rights and deprives them of their childhood. In most cases, it puts an end to a girl’s formal schooling, and increases risks to her health due to early pregnancy or physical and sexual violence.

“We are concerned that COVID-19 could threaten progress against child marriage in India. The pandemic has caused schools to close, economic shocks and interruption in social services, which can all increase the threat of child marriage,” Yasmin Ali Haque, UNICEF’s representative to India, told DW.

Haque stressed that district-level bodies should be empowered across the country so that officials can respond faster and prevent child marriages.