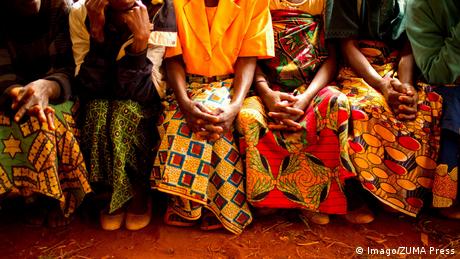 Violence against women, or gender-based violence (GBV), includes many types of abuse, ranging from physical, sexual, and emotional violence to female genital mutilation and trafficking.

The rate of GBV in sub-Saharan Africa is higher than the global norm. Around 44% of African women, or more than two in five, have been subjected to gender-based violence, a 2020 study found.

Survivors of such violence face constant stigma because of their experiences. To break the silence, DW brings you the voices of seven women from across Africa who are choosing to speak out.

“I’m an author, an entrepreneur, a women’s and girls’ rights advocate, and a mother. At thirteen and sixteen, I was raped respectively by my reverend and my uncle. I could not speak to people about this, not even to my mother, because my mother had given me away. I lived with this trauma for over thirty years and summoned the courage to speak about this in 2019. It wasn’t easy. But it’s the best thing I’ve ever done in terms of dealing with what happened to me because while I get under pressure, by speaking out, I have helped women and girls summon the courage to speak about their ordeals. If nothing else, that has put a smile on my face. Today, I continue to counsel women and girls about sexual violence in my country.”

“I had a boyfriend who was very abusive. I can’t remember how many times he beat me after a small misunderstanding. I remember this one time that I shaved my hair. It was my decision but he was very angry that I went to shave my hair without getting his permission. He beat me. The following day, he came to apologize and I accepted his apology. A week later, he asked me to wash his clothes. I refused because I wasn’t feeling well but he didn’t accept that. I still remember the punches I got that day because I nearly died. That man could abuse me one day and apologize the next. I kept accepting his apologies until one day I decided to leave him. It wasn’t easy but I did. My advice to other women experiencing abuse is to leave before it’s too late! Abusive men are very cunning, they abuse you today and bring you gifts the following day. Those gifts are not worth dying for — leave that abusive relationship now!”

“I was in the center of Mogadishu when two men in a car sprayed a painful liquid onto my face and then forced me into their car. I asked them: ‘where are you taking me? Leave me alone.’ I tried to wave my hands near the car window to draw attention to myself, but one of the men was sitting next to me in the back seat, and he sprayed the liquid on my face and kept hitting me. After driving towards the outskirts of town, there were problems with the car, and my kidnappers got out to look. They were busy talking on their phones, so I got out of the car to escape, but one of the men kicked me and ordered me to stay in the car. I struggled with him, fighting him and throwing sand on his face. Then I ran and ran and ran, sometimes falling down. I continued running until I could see more buildings. I saw an older man with a tuk-tuk [rickshaw taxi] and asked him to take me to the university, which he did. My family took me to see a doctor. I had X-rays and ultrasound, but they didn’t find anything seriously wrong with me.”

Five teenage girls were abducted in Mount Barclay in September 2021 and forcefully initiated into the Sande, a secret society for women. Female genital mutilation is part of the initiation. The girls’ parents say the Sande took their daughters without their consent and that police and child services turned a blind eye.

“We were sitting down, and a group of traditional practitioners came and surrounded us and started rubbing chalk on us. I asked them: ‘what’s the meaning of this?’ And they said: ‘we are sent to come and invite you to the Sande.’ I asked them to let me get my mother, but they said no. They held my sister and me by force as though we were thieves or some kind of criminals. They gagged us and carried us away. It was never our plan to go into the Sande Bush. They took us by violence, and then they did things to us. When I think about it, I am still feeling hurt. Life was very difficult for us. We really suffered in that bush, so I am very grateful to God that we are out.

I had an issue with my mother-in-law. I was trying to make things clear to her when my husband came home, and she complained about me to him. Here in Tamale, in northern Ghana, when you have an issue with your mother-in-law or your father-in-law or your sister-in-law, no one is ready to listen to you. It doesn’t matter if you are right or wrong. You’re wrong! My husband and I had a heated argument, and he beat me up. My challenge is society. Society keeps pointing fingers at people or women who get married and then leave, especially if they leave because of abuse. They tell you that you are being impatient. I wanted to leave, but honestly, a lot of people came, and they made it seem as if abuse is normal in marriage. For me, it isn’t normal, but I didn’t really know what to do. I didn’t involve the police or elders. Actually, no one gave support to me. They made it seem like I had no right to try to point out my rights to my mother-in-law. They said I had disrespected her. I became depressed and had suicidal thoughts. I isolated myself and used to sit and cry. I felt nobody wanted me.

We domestic workers are being abused in a very bad way. We work too much, and the money is too small. You find that you work from Sunday to Sunday, or sometimes you are dismissed Saturday afternoon, and you have to be back at work on Sunday night. If you stay in on Sunday, if your employers are there, they call you to come and do a job even though it’s your day off. Even food, you are often told to eat bread. If we were paid more, we could take lunchboxes, but the money is small. We pay traveling cash for transport, money for everything. We aren’t able to complain. We don’t have power. If you complain about anything to your boss, he’ll tell you the position is open, and someone will come and work who wants the job.

I’m an activist campaigning against the practice of female genital mutilation. I was initiated at age twelve, ten days after the death of my mother. The shock, the pain can’t be explained. I bled and fainted when I tried to walk. After our graduation from initiation, I went out without being healed properly. My vagina was swollen for a month. But even at that age, I started talking to my friends who were never cut, explaining to them my ordeal and showing them my wound. Now, the organization I run has created an alternative rite of passage that allows girls to go through the cultural practice of bondo without having to go through the cutting of their clitoris.

*Her name has been changed to protect her identity. DW has chosen to refer to the women by their first names to respect their privacy.

These interviews have been edited for brevity and clarity. Claudia Anthony in Sierra Leone, Mirriam Kaliza in Malawi, Evelyn Kpadeh in Liberia, Maxwell Suuk in Ghana, Mohamed Odowa in Somalia, and Thuso Kumalo in South Africa contributed to this compilation of women’s voices.

Afghanistan: How a remote border crossing allows nomads to travel