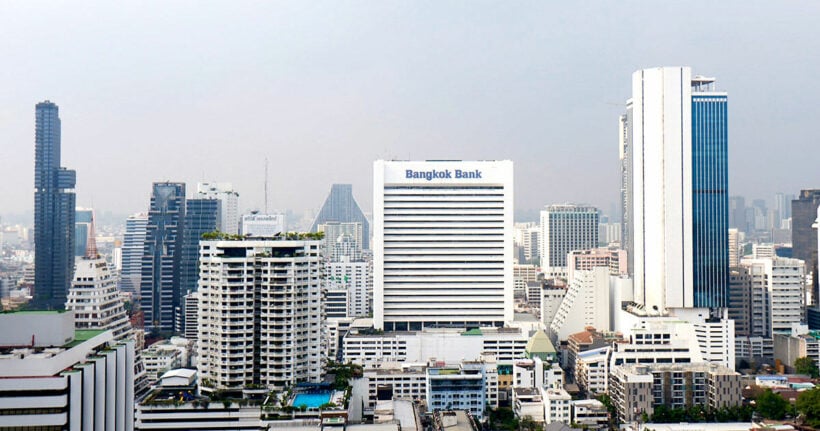 Having a Thai bank account can help you manage your finances more effectively, including sending and receiving money from overseas. Obviously, it’s necessary for making payments in your everyday life, as well as receiving a salary if you work here and are getting paid in Thai baht. And a Thai bank account is essential for certain visa types.

During the pandemic, many businesses began adopting cashless payment methods with QR codes linked to digital e-wallets. Needless to say, you’ll have to open a Thai bank account if you want to enjoy the convenience of mobile payments in the Land of Smiles.

When opening an account at a Thai bank, it’s important to have the following documents. Some banks might require different paperwork, so it’s advisable to have all the important papers in hand. You’ll also need a document proving you’ve been living in Thailand for a certain amount of time.

Required Documents
If you need to open a Thai bank account, you should present these documents…

The majority of banks have English-language websites. Before determining which bank is ideal for you, it is advised that you research several of the options. Thailand’s banks are controlled by the Central Bank of Thailand. The central bank was established in 1942.

Before you’re going to open a bank account in Thailand, it’s good to know what is available on the market. There are many banks to choose from, and here is the list of banks in Thailand.

Kasikorn Bank
Kasikorn Bank was founded in 1945, after World War II. Kasikorn was the first Thai bank to offer credit card services, beginning in 1973. The bank concentrated on assisting farmers, in keeping with the Thai population at the time. It was originally known as Thai Farmer’s Bank.

Kasikorn grew in line with the country’s economy. When the fast growth of the 1980s and 1990s resulted in the 1997 economic crisis, Kasikorn responded with their “Reengineering Policy,” which allowed the company to survive and eventually thrive again.

Siam Commercial Bank (SCB)
The first Thai bank, Siam Commercial Bank, was founded by royal charter on January 30, 1907. The bank has played an important role in giving Thailand financial services. Their wide banking network and the constant effort of technical innovation back up their services.

SCB offers many services to meet the needs of every customer from currency exchange, debit and credit cards, home loans, personal credit as well as investment and insurance products.

The bank services don’t stop there, and it offers its services for SME and corporate customers. Corporate advisory, investment banking, international trade financing, debt and capital market, and much more.

In February 2019, ING Group, Thanachart, and the Bank of Nova Scotia signed a memorandum of understanding and declared their ambition to merge TMB Bank and Thanachart Bank, setting a historic agreement. With a deal worth more than 100 billion baht, it was the largest takeover in Thailand’s banking history.

Both banks advanced their collaboration to form a new bank based on the concept of “One Dream” to improve Thai people’s financial well-being, with “One Team” to achieve “One Goal” of being our customers’ preferred bank.

“TMBThanachart” or “TTB” has been officially opened and is ready to bring the strengths of TMB and Thanachart to improve Thai people’s financial well-being. Following the Entire Business Transfer in July, a wide range of interesting financial services will be available across all channels.

Krungthai Bank
Krungthai Bank first opened its doors in 1966. The bank was formed by the merger of Kaseat Bank and Monthon Bank, both of which had the Thai government as its major stakeholder. The first branch was located on Yaowarat Road, which was a busy business area at the time. Since then, the bank has played an important part in Thailand’s economic development.

The bank’s philosophy has changed to support customer stability and growth, as well as contribute to the creation of a better society and provide adequate long-term returns to the shareholders.

Bangkok Bank
By total assets, Bangkok Bank is the sixth-largest bank in Southeast Asia and the largest bank in Thailand. Since our inception in 1944, we have provided cooperate and individual customers with the confidence and support they need.

They’re a significant source of corporate financing and SME banking, with around 240 business centers, business desks, as well as the biggest retail client base in the country, with about 17 million accounts.

Kiatnakin Bank
Kiatnakin was established in 1971, followed by Phatra Thanakit a year later in 1972. In 1993, Kiatnakin Finance and Securities went public.

Kiatnakin Finance and Securities Public, along with 57 other banking firms, were temporarily shut down due to the Asian Financial Crisis in 1997. In 1998, the Ministry of Finance gave the authorization to reopen for operations.

In September 2012, Kiatnakin Bank and Phatra Capital announced the completion of a merging Kiatnakin Phatra Financial Group. The combination aims to align the knowledge of both businesses in order to achieve excellence in financial service for the interest of all customers, workers, and investors, as well as to contribute to the growth of the country’s financial industry and the overall economy. The stock trading ticker was formally renamed “KKP” in 2013.

CIMB Bank
CIMB Thai is Thailand’s 10th largest commercial bank in terms of assets. The bank, originally known as Bank Thai, was founded in August 1998 as a result of the unification of 14 financial organizations in the wake of the Asian financial crisis in 1997. CIMB Thai provides a complete range of banking services to both businesses and consumers in Thailand.

CIMB Group is an ASEAN universal bank and one of the region’s major corporate advisers. In addition, it is a world leader in Islamic financing. The company is located in Kuala Lumpur, Malaysia

Krungsri
The Bank of Ayudhya was founded in January 1945, and its shares were first traded on the Thailand Stock Exchange in 1977. In terms of loans and deposits, the bank is currently Thailand’s 5th largest. Krungsri offers both corporate and individual customers a broad variety of banking services.

Raugh
51 minutes ago, Soidog said: All you can do is put money in to the account and take it out. Sounds much like a money laundering dream scenario.
astro
I also opened a bank account with on a tourist visa more than 20 years ago. Had to approach several banks since policies vary, even from branch to branch of the same bank. So - shop around if the first…

Soidog
34 minutes ago, Raugh said: Sounds much like a money laundering dream scenario. Well that’s the only concern. But if they detect suspicious activity then they have your passport details and address. They can suspend your account at anytime.it’s no…
CedRacine
Only option I had this january with 60 days tourist visa was Bangkok Bank linked with an accident-death insurance. Mostly Very happy how it works with instant cross-banks payments-transfers, while I am fundamentaly anti-CBDC. Lack of details (ie shop name…
oldschooler
Try Yourself with Passport & Imm. Address Cert. Try All Banks ( all together in large malls) Ignore Difficult Banks (those asking for Work Permit or Embassy Letter) Get Easy Missing Documents Use Lawyer / Agent (if above fails)

Travel Guide: Where to go with family in Thailand 2022