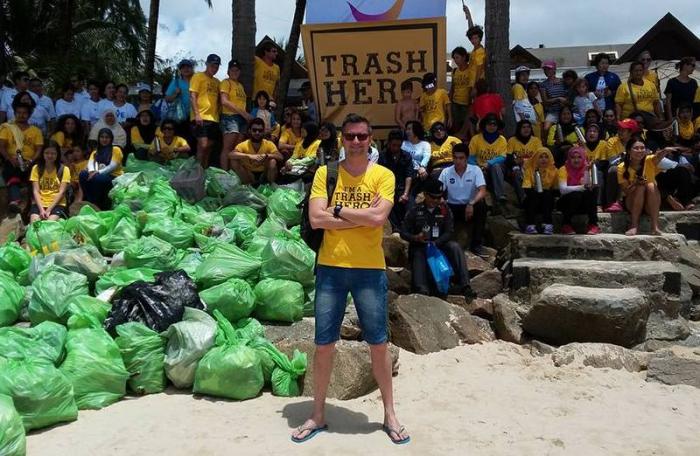 PHUKET: Rich Cramp is the Phuket organizer of Trash Hero, an organization dedicated to solving the global garbage problem. He has a degree in English Literature and currently teaches at HeadStart International School in Phuket. He spent part of his childhood in Thailand, before moving to Hong Kong, then Taiwan and finally settling in England.

“I moved back to Thailand to travel and teach after 22 years away, and this is part of the reason I decided to start Trash Hero in Phuket – I saw the effect of 20 years of unregulated plastic pollution,” he says.

Rich laments the fact that only hotels and businesses near the beach focus their efforts on garbage collection and disposal, with little or no input from the government, despite the fact that one of Thailand’s main attractions is the beaches.

“One image I’ll never forget is seeing some Thai children taking selfies on a beach that was covered in rubbish. What got me was that they didn’t seem to be aware of the rubbish they were standing in. Or if they were, they thought it was normal and still worth a photo. At once I knew there were two problems: the beaches aren’t looked after and the need for education in Thailand regarding plastic pollution is huge,” says Rich.

Rich believes the most important step toward solving the garbage crisis is educating the youth about pollution and its effects on the planet.

“If any of our Trash Heroes grow up to be in a position of influence, just imagine the difference they can make. The whole concept of sustainability is that we are borrowing the world from future generations and whatever we put in it, they will have to deal with. It shows kids that you need to get off the couch, stop signing petitions on Facebook and get your hands dirty to fix the world’s problems,” he says.

Rich is more than happy with the response to Trash Hero’s cleanup campaigns and says that all kinds of people, ranging from local street sweepers to tourists and expats, show up at the cleanups. However, he believes there is still much more to be done, particularly with regard to changing people’s mindsets.

“Someone once wrote online that initiatives like ours don’t make a difference – don’t believe the naysayers. On average, we pick up 200kg of trash every week, which means that by August next year we will have stopped about ten tonnes of rubbish floating back into the ocean,” he says.

Rich says that laying the blame on tourists may be easy, but it’s not the solution.

“A lot of the stuff we pick up isn’t just litter from tourists, although the current narrative is that tourists are the main problem. They certainly are part of the problem, but if we are to fix this, there needs to be a culture of openness and dialogue,” says Rich.

“In future Trash Hero Phuket campaigns, we want to take action on plastic bags before they leave the shops. I’d also like to work with the local fishing industry to see if we can reduce the amount of trash being dumped into the seas by some of the boats,” he says.

Being a full-time teacher and a family man, finding the time to commit to the initiative is one of the biggest challenges for him.

“At the moment, I join clean-ups every two weeks. Sounds simple, but not when you have to arrange printing of t-shirts, post boxes of bottles, find sponsors and attend the clean-ups themselves. It all adds up. The Tourism Authority of Thailand is the official sponsor and has been of great help to us. At the end of the day, once you’ve cleaned a beach and the sun is setting, it’s a great feeling,” he says.

Profile: His Majesty through foreign eyes

Profile: Sebastien Tronchet – No stranger to the land of smiles