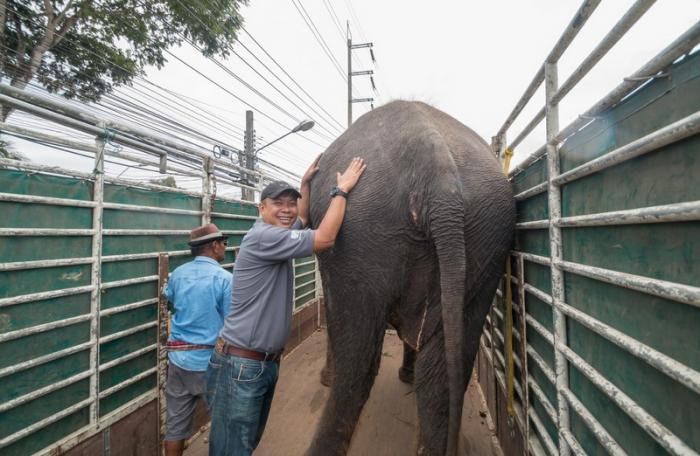 PHUKET: Phuket native Montree Todtan is the CEO of the soon-to-open ‘Phuket Elephant Sanctuary’ in Pa Khlok. The sanctuary is a dedicated last home for Asian elephants rescued and rehabilitated from life in the captive elephant tourism industry.

Now 46 years old, Mr Montree grew up in Phuket and after completing high school went to Ramkamheang University for three years before becoming a salesman. His sales work took him around the country and the region, but when the economic crash came it was time to return home and do something different.

He opened the ‘At Hill Elephant Camp’ on Nakkerd Hill (Big Buddha Hill), offering elephant trekking to tourists, but things took a new course when he wanted to retire one of the elephants, named Tub Tim, working at the camp in 2014. That’s when he met Lek Chailert, who operates the ‘Elephant Nature Park’ in Chiang Mai under the ‘Save [the] Elephants Foundation’.

Mr Montree spent time at the sanctuary in Chiang Mai, learning more about how to look after aging elephants, and the pair teamed up.

“Elephants are just like people. They sense who has good or bad intentions. Watching the elephants at the sanctuary has given me much more insight into the real lives of elephants than when I was operating the trekking camp,” says Mr Montree.

“Although elephants don’t work in the logging industry anymore, they still work very hard and can develop health problems over the years that turn into painful disabilities. I wanted to give these hard-working elephants a retirement home where they could live out the rest of their lives in peace, just doing what elephants do,” he says.

“Watching the sanctuary’s first two elephants familiarize themselves with their new surroundings and with each other is a delight.

He said that elephants usually work until they are about 60 years old and can live as long as 100 years, but taking an elephant to the sanctuary depends primarily on their health.

“We buy elephants that are ready for retirement from their existing owner. Most of the funding to look after the elephants comes from donors and through the Save [the] Elephants Foundation as well as the EARS Asia foundation,” says Mr Montree.

“Last weekend we were overjoyed to welcome our very first elephants, Madee and Kannika, to their new home with us. I’m very proud to free them today. This is my dream. My dream for a long time… We look forward to making many more dreams come true for the elephants and for all of us here at the Phuket Elephant Sanctuary.”

Profile: Mitr Kokopan – Around the world and back