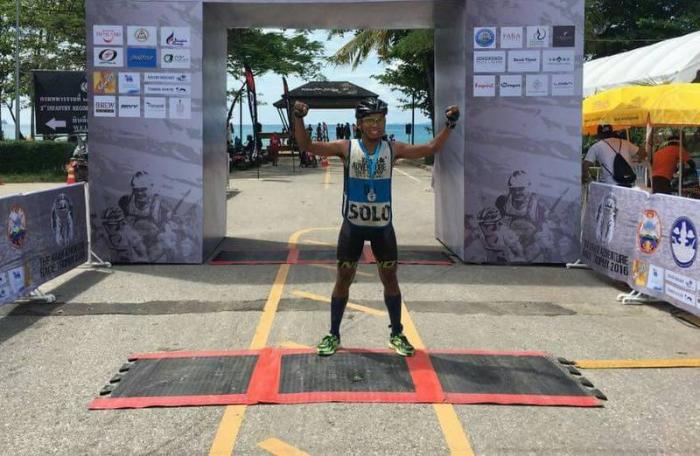 PHUKET: Manop Suwannachit, 31, is the brand ambassador for ‘Xterra Asia Pacific and World Series 2017–Road to Hawaii’ which is being organized by Xterra Thailand and Active Management Asia (AMA) in Phuket today.

Mr Manop is also participating in the races – he is a well-known sportsman who has won many competitions throughout his career. Last year, he took part in Xterra Samui, which led to him being chosen as the brand ambassador for this year’s event.

“Being a local, I know Phuket intimately and can tell which paths are safe and suitable for athletes, so I was involved in designing and finalizing the route. I also helped the Xterra team with documentation and other organizational issues and arrangements,” says Mr Manop.

Mr Manop currently owns a bike shop in Phuket. He has been involved in competitive sports since he was 13 years old. He started with running both short and long distance races. After he sustained an injury, which prevented him from participating in running, he switched over to cycling.

He started with mountain biking when he was 15 years old. About eight years ago, he also got involved in road cycling.

Along with competing in events throughout the southern region and all over Thailand, Mr Manop is also a member of Z- Coaching Phuket by Jurgen Zack.

“I have been playing sports for several years. However, I just joined the Xterra event last year in Samui. After my first experience with them, I fell in love with this competition – it is a perfect combination of cycling and running,” says Mr Manop.

“The special thing about this competition is that you are not just competing in the usual tracks, such as roads – you are running and cycling in a forest, which makes it even more challenging. You get a feeling of being in touch with nature, which is great,” he adds.

Mr Manop has been practicing both mountain biking and running especially for this competition.

“I feel ready to take on this challenge – I have had years of practice, six days a week. Practice makes perfect and it is certainly true in my case,” says Mr Manop.

The triathlon and duathlon are part of the ‘Xterra Off Road Triathlon World and Asia Pacific Series’.

Winners will receive free tickets to participate in the Xterra World Championship finals to be held in Hawaii at the end of the year.