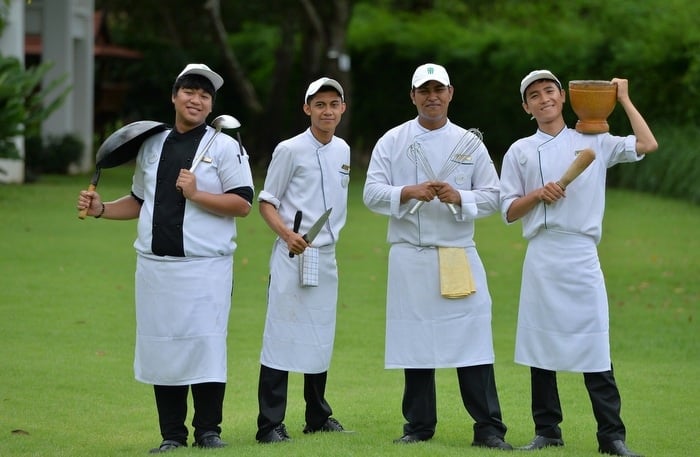 “To make a baby is nine months, but we made this baby [the restaurant] in eight,” said Senior Vice President of Banyan Tree Holdings Claire Chiang.

It was clear at the restaurant’s opening this month that the ‘seedlings’ themselves were very proud and prepared for their new internship.

“Seedlings is significant because it gives a chance to young people who may not have the opportunity to find the platform for their own development,” Ms Chiang noted.

Phuket’s community played an essential role, not only in the development of Seedlings, but of Laguna Phuket itself.

Ms Chiang fell in love with Phuket nearly 20 years ago, stating, “When we first came here…there were no roads, no electricity. It was an abandoned tin mine. But we were so enamored by the sunset we thought, this is the place we would like to do something.”

She was quick to add that it is not only the leaders and investors that have given Laguna Phuket its success. She contributes it to the local community whom they have supported and nurtured, and who in return have given Laguna their time and resources.

“We believe that business has an important role. One focus is about community building and talent development.

“That’s why we are happy we have developed Laguna Phuket. It has given a lot of opportunities to people to work here, live here, play here and develop their potential here.”

Ms Chiang made it clear that Laguna Resorts and Hotels Plc, under Banyan Tree’s group-wide mentorship program, would not stop in Phuket with their community building initiative.

A third Seedlings is underway in China and there is talk of one opening in Mexico.

“The bigger picture for doing what we’re doing is to build resilient communities. Businesses cannot thrive in places where people are deprived,” Ms Chiang said.

“We planted the seeds; we are going to help them grow, in order to change lives.”

Seedlings Phuket restaurant is located at Laguna Holiday Club Phuket Resort and is open daily from 6:30am to 10pm, serving both western and Thai dishes.