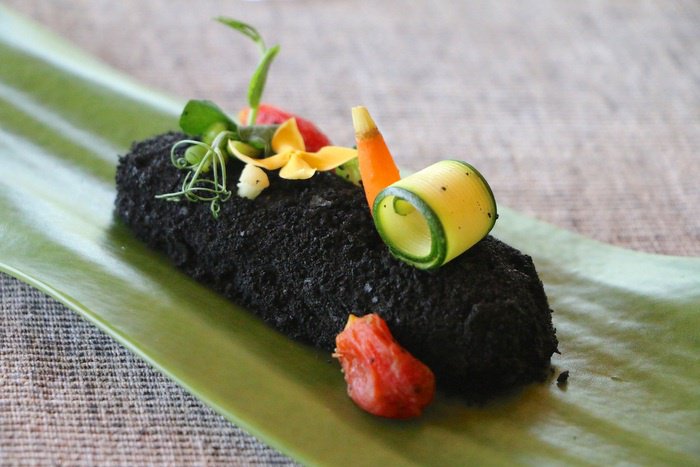 PHUKET: Some restaurants are defined by their menu, others by their location or wines. Iniala’s Aziamendi is difficult to define. It gets everything right – the menu, the location and the wines. But, if there is one thing that sets it apart, it’s the boundaries that it breaks.

Where to begin? Take the chef, for a first example. Eneko Atxa began his career at the age of 15, which is not exactly unusual in his profession. It took him only five short years to win his first Michelin star and in 2012 he had three, an impressive achievement which made him Spain’s youngest-ever three Michelin Star Chef.

To keep up the pace, Atxa opened a new restaurant just north of Phuket in 2013 at Iniala Beach House and called it Aziamendi. Two years later, it is safe to say that Aziamendi is the Mecca for Phuket foodies. While exploring the island’s culinary delights, we all dream to take the 10-kilometer ride north and sit at one of Aziamendi’s tables.

My chance to experience Aziamendi came recently, during a wine lunch organized by Fabulous is Needed (FIN), a company that deals in wine imports, tailor-made travel and event planning. This particular lunch even featured the wines of Weingutt Wittmann, a well-respected producer from Germany’s Rheinhessen region.

Spectacular wines are nothing out of the ordinary at Aziamendi, whose head sommelier Fabien Etienne recently won an award for the best wine list in Thailand. And neither is spectacular food. Dining at Aziamendi is a feast for the eyes, with each dish a little masterpiece. From the raspberry infused cherry tomatoes served straight from a bonsai tree in Iniala’s gardens, to the dessert of strawberries and roses served in a rosewater mist, everything looks – and tastes – fabulous.

“Aziamendi keeps the soul of the food. The dishes might look unusual, amazing, but when you eat the duck, it’s still duck, and when you taste the foie gras it still tastes like foie grass. The flavors are there,” explains FIN managing director Benjawan Wisootsat.

Indeed, they are. But this is not food to be simply digested; it is to be tasted, savored and experienced. Each plate at an Aziamendi table straddles the line between dining and art. Aziamendi’s mission to push its boundaries even further is nowhere near complete, that is, according to Wayne Milgate, Iniala’s general manager.

“We have an amazing product that we want to present to people. Not everybody has time to come to Aziamendi for a long, degustation dinner,” he explains.

“We also already have a bakery down in Chalong and we are going to open two more within the next six months. We don’t want to contain our brand just to this location,” explains Milgate.

Even on their own home ground, within the premises of the spectacular Iniala Beach House, the Aziamendi team never ceases to experiment. Some of chef Eneko Atxa’s dishes have been on his menus for more than eight years, but none have remained the same. They have all improved and evolved. In this dynamic landscape, with the unexpected always around the corner, one thing is for sure – things never get boring.