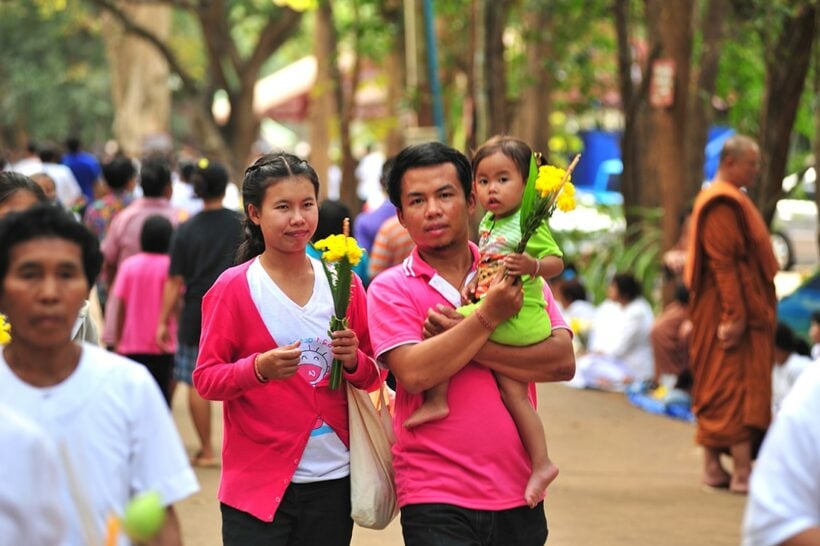 Between 1987 and 2015 the number of childless couples in Thailand has risen 300 percent.

Nattaya Boonpakdee, an official at the UN Population Fund (UNFPA), has attributed the increase in the number of childless couples to the cost of raising children, a perception that children are a burden, and the fact that many Thais are getting married at a later age and hence encountering infertility problems.

“Back in 1987, childless couples accounted for just 6 per cent of total Thai families,” Nattaya said earlier this week. She claims the percentage of childless-couple families soared to 16 per cent in 2015.

Nattaya says the increase in childless-couple families was higher in urban zones than in rural zones, according to population reports.

According to a 2015 report, the percentage of childless-couple families stood at 16 per cent while that of parents living in families with children totalled 27 per cent.

“The number of three-generation families in which children, parents and grandparents live under the same roof was at 37 per cent,” Nattaya said.

“Two years ago, the percentage was at 33.6 per cent. This means extended families are the biggest group in the country – not nuclear families. The percentage of people living alone was at 14 per cent. About 2 per cent of Thai families are children living with their grandparents.

“About 1 per cent of Thai families are people living together without blood or marital ties,” said Nattaya.

“They are friends. They are like family members who are supporting one another.”

The Health Department’s director-general, Wachira Pengjuntr, said Thailand’s birth rate was now only 1.6, while the country needed a birth rate of 2.1 to replenish itself.

“As it is very difficult to encourage people to have more children, we have now focused on ensuring children have a quality upbringing,” he said. According to Wachira, his department has drawn up a plan for the wonderful 1,000 first days of life.

“We count the stage of lives from the time human foetuses are developed during pregnancy. This stage takes 270 days,” he said. He said during this stage, pregnant women should seek pre-natal care and meet a doctor before the 12th week of pregnancy. Nurturing communities.

“They should also meet doctors at least five times while pregnant,” he said, to ensure they get proper advice on nutrition, physical activities and sleep.

“Pregnant women should also be prescribed iodine and iron,” he said. He added that the second stage would cover 180 days – babies aged up to six months old.

“Our clinics will promote breastfeeding and inoculation,” he said. He added that parents or baby carers would also be trained to ensure proper upbringing.

“We will assign teams to visit young babies at home to follow up on their development and check on their health,” he said. Wachira said the third stage covered children aged between six months and two years.

“We will monitor children’s development and give parenting advice,” he said. According to him, communities will be nudged to provide free milk and eggs to children during the third stage. Communities should also have playgrounds and reading corners for them.

TropOut is back in Phuket all this week