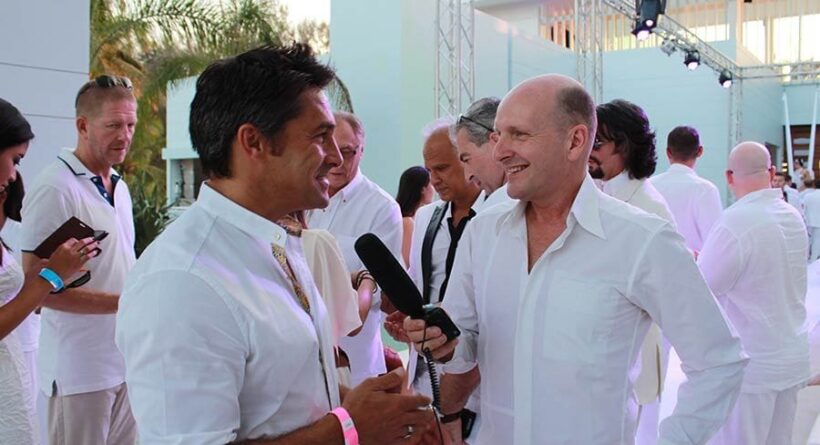 Featured in this week’s edition of mediaweek.com.au

What do you do if you’re a middle-aged entrepreneurial spirit, a self-confessed media junkie who’s put in 20 years in Australian radio, then invested in a Chinese boat-building business and went bust?

If you’re Tim Newton, you pack your bags and head for a tropical island like Phuket where you can eat cheap Thai food and hang up a shingle saying you’re in media business mode again, but fully embracing the digital world.

That was Newton’s move in 2012, and now, after some savvy moves, he’s heading Thaiger, which he launched basically as just an FM radio station in October 2016 when he and a friend bought the digital assets of the once print-heavy Phuket Gazette, which had shut up shop.

“They had run a weekly newspaper for 24 years,” Newton told Mediaweek.

“When The Thaiger bought the digital assets of Phuket Gazette in August 2017, we also took over the ongoing ‘story swap’ relationship that The Nation [national newspaper] and the Gazette had enjoyed before.

“The Thaiger and The Nation still share stories. The Nation provides the foundation for our national story coverage.”

In February this year Thaiger also collaborated with another online news service, Thai Visa, to further the TV news briefs Newton has also been doing.

“I’d tinkered with doing a daily TV news brief – about five minutes – with a previous employer,” he said.

“There was nothing else like it in Thailand at the time. I ended up doing about 700 episodes in total, the last 100 at The Thaiger in collaboration with Thai Visa, which was wanting to streamline a lot of its content and so outsourced its daily news to The Thaiger.

“At our peak the program was getting up to an average of 20,000 views a day. Once it reached about 60,000 views but, for a boutique news company, the leverage on meager resources was just too difficult to rationalise. We now do twice-weekly TV reports about various topical issues, which fit the flow of the ‘instant’ news cycle much better and are quicker to edit.”

Now Newton’s eating more expensive Thai food and said, “We now have the fourth-largest English-speaking media company in Thailand with plans to be Numero Uno by the end of 2019.

“The entire Thaiger project has seen very swift growth in a market where it’s difficult to get your voice heard through the white noise of digital and social media.”

There’s also a tropical island buzz about the way Thaiger conducts its business – it’s a company without an office and a radio station without a studio.

“Your office is your computer and, as long as you have WiFi, the office can be open, anywhere, any time,” Newton said.

“An office is a waste of good real estate and whatever rent you’re paying is better spent on boosting posts on social media. You want to have a meeting? There are plenty of great coffee shops for all that stuff.

“The staff, all seven of us, are linked up with some sexy apps, which makes much better sense than running around an office. Be mobile, be flexible.”

With the radio station Newton said, “We work entirely in the ‘cloud’. Brilliant automation software and some deft DJs make it all work. We never see each other – the three DJs all live in separate parts of the island – we’ve got a very successful template that can work anywhere for a fraction of the running costs of centralised studios and links to transmitters, etc.

“It took us a year to get it all working properly but there is no way we’d ever go back to having a studio and running radio the ‘old’ way.”

Newton’s success as a localised news provider and island media entrepreneur is the result of an interesting media career in Australia.

“I started out writing promotional props for Melbourne radio 3AW in the early 80s with zero intention of ever actually being on the radio or in front of a camera,” he explained.

“But serendipity was to play its part and I ended up producing radio programs for 3AW and (in those days) the Macquarie Network, even doing some fill-ins for programs.

“I was involved in the setup of a few public broadcasting stations – at one I hosted the breakfast show for three years. Then it was news-reading with the FOX/MMM/Gold newsrooms in Melbourne, while owning and running roller skating rinks and restaurants.

“Somehow, again completely unplanned, I ended hosting a regular show on JOY Melbourne, a station dedicated to the GLBTI voice.

“Without a ‘format’ I was able to come up with all sorts of different programming ideas and we were the first to do a live coverage of the Sydney Gay and Lesbian Mardi Gras – something the stations went on to perfect over the years. Real colour radio!

“We also developed a current affairs format called The Spin, which was slightly subversive and slightly controversial. I think that’s where I cut my teeth in a real love for the medium. Somehow we won the Deutche Welle Award for the best public radio talk show in Australia.

“That’s sort of 20 years in radio wrapped up. It all just ‘happened’ without any plan.”

But back to now and plans Newton may have for the future.

“In the next 12 months you will see a basic consolidation of all the changes in the past year. We will introduce another radio station, either in Phuket or Bangkok, purely for branding.

“We will monetise and improve our Classifieds and Jobs pages. I might try to take a few days off sometime as well. I’m 60 next year and I’m just loving immersing myself in all this new media, making lots of mistakes and finding new ways to reach out, report the news and tell stories.”