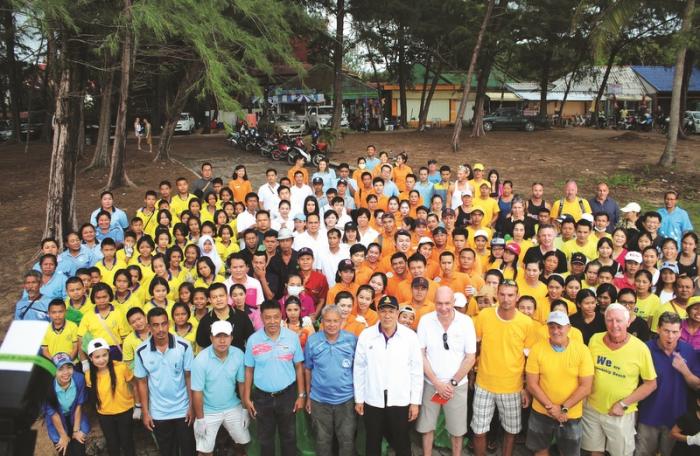 Supported by the Rawai OrBorTor and moderated by DJ Tom Tank of Radio 89.75, more than two tonnes of rubbish were collected from the front and back of Nai Harn Beach.

Spearheaded by Claude Baltes of Sunsuri Phuket and in cooperation with Rawai Mayor Aroon Solos, nearly 300 people participated in the clean-up.

The OrBorTor along with their team, staff from Atmanjai, Friendship Beach Resort, Old Dawg, Serenity Resort & Residences, Sunsuri Phuket, The Mangosteen Resort & Spa and Chivitr worked with children and mentors from the Watsawangarom School, Rawai. They were also joined by local residents and several tourists.

“This was a successful event. Not only is the beach much cleaner, but we have now agreed with the OrBorTor chief how the private sector and the local authorities will work together to keep the beach clean in the future,” said Mr Baltes.

“Thank you to all those who helped to organize and participated in the event.”

The Rawai Nai Harn Business Community aims to promote local businesses in this part of Phuket and also launched a successful benefit card for local residents a few years ago.

On Deck: Better co-ordination in the marine industry