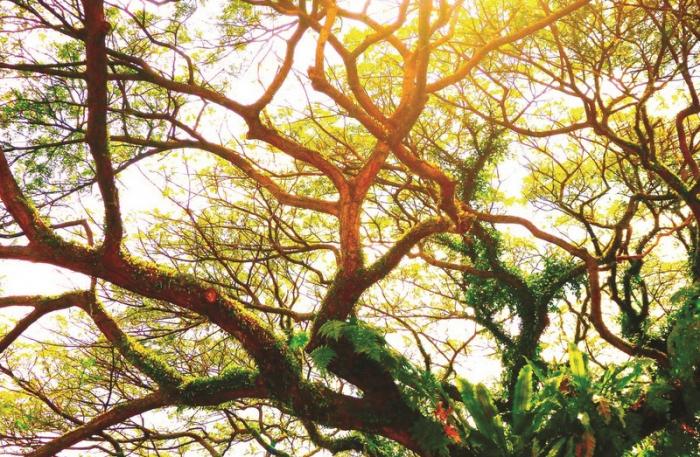 PHUKET: I live in Saiyuan in the south of Phuket. Every day for years and years, I have taken pleasure from the presence of a magnificent forest tree, probably a dipterocarp, high above the road and providing an arching green canopy to drive under on my way home. Inspiring… but in the blink of an eye, this tree, maybe 100 years old, has gone. All that remains is an ugly stump.

Why? I asked my Thai partner. “Oh! It was in the way. The man wanted to extend his house”. For her, it represents progress. For me, mindless destruction.

Of course, we witness such acts everywhere in Phuket. The island has lost almost all of its original deciduous forest, much to encroachment. Most undeveloped land is now either scrubland, or rubber and palm oil plantations. Worse, every condominium, shop house and car park obliterates a patch of greenery, along with its trees.

Almost nothing is ever done to replace this forfeiture.

Concrete jungles give nothing remotely beneficial to our environment. In fact quite the reverse: they spew out waste at an alarming rate. On the other hand, trees and the oceans are the lungs of the earth.

A mature leafy tree produces as much oxygen in a year as four people inhale in that period. By planting more trees worldwide, say 20 million, we would gain 260 more million tons of life-enhancing oxygen. At the same time, these trees would store (as carbon) 10 million tons of harmful CO2 – the greenhouse gas primarily responsible for climate change.

Furthermore, trees reduce run-off by holding soil in place. Like a giant sponge, the root systems retain rain water and then slowly release it through their leaves.

That the world is experiencing far more disasters due to landslides is in large measure due to de-forestation, to human destruction of forest and consequent loss of its capacity to bind the earth and soak up moisture. When properties are built on denuded hillsides the potential threat of mudslides is heightened.

Furthermore, some developers in Phuket would do well to realize that trees increase the value of property. Villas or apartments surrounded by trees sell for considerably more than properties with none. And people are more willing to relax or shop where there are inviting areas of greenery.

Singapore, much more developed than similarly sized Phuket, has impressive avenues of trees everywhere. Not only more appealing, but cooler than our own urban sprawl. Research shows that trees can cool a city by up to 10°F.

It is not just trees. We are all doing our bit when we plant gardens. Shrubs also provide shelter, food and nesting habitats for the considerable range of birds, mammals, reptiles and insects that still live in Phuket.

My own garden is home to squirrels, coucals (of the cuckoo family), sunbirds, bulbuls, and spider eaters, as well as skinks and agamid lizards. Butterflies abound too. Nothing unusual in that. If you provide the right natural conditions, Mother Nature will respond positively.

Happily, there are worthwhile global initiatives making a difference. Since 2010, ‘The Canopy Project’ has planted more than 1.5 million trees in 21 countries, focusing mostly on areas in need of reforestation. The benefits are not just aesthetic. The UN estimates, that for every dollar spent on reforestation, US$2.50 is generated in local downstream income and benefits.

So far there is no Canopy Project in Thailand, but at least Phuket is increasingly alert to the needs of a tropical island surrounded by eroding seas. The planting of mangroves is a welcome sign, along with a growing public concern for our beach-side casuarina trees, but much more needs to be done at a grass-roots level.

On Deck: A look inside the Royal Pavilion