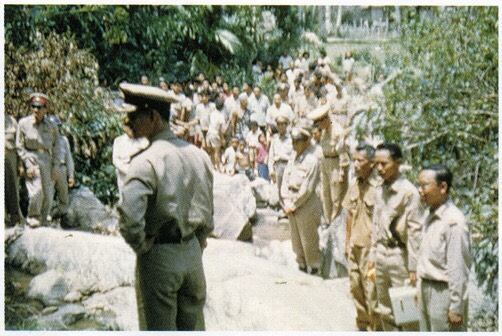 It’s a public holiday today. It’s Father’s Day and National Day in Thailand, both proclaimed as celebrations of the birthday of the late King Bhumibol Adulyadej. It’s also the World Soil Day, named by the United Nations as a day to commemorate the late King’s work in the area of land conservation and crop development. All public offices are closed but if you need a bank, head to one of the shopping centres where they will still be open. It’s also Day Two for the Phuket King’s Cup with plenty of wind guaranteeing some excellent racing for the 83 reacts competing.

A total of 62 schools in Songkhla’s seven districts around Songkhla Lake will remain closed until the floodwaters recede.

Authorities say 62 out of 86 schools were closed yesterday and would remain closed until the situation improved. They say the flooding around Songkhla Lake had been the worst since 2005.

Meanwhile, floodwater levels were dropping in several areas of Narathiwat after two days without rain, but the situation remained unchanged in other southern provinces. 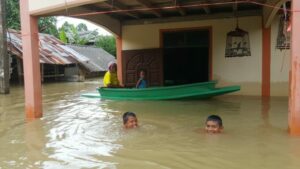 Don knows nothing about it

Don says that his ministry had no such information and that the British Embassy had not informed the Thai government of any such action.

The Foreign Ministry in late October revoked all four Thai passports Yingluck owned after she was sentenced in absentia to five years in jail for failing to prevent irregularities in her government’s controversial rice-pledging scheme. 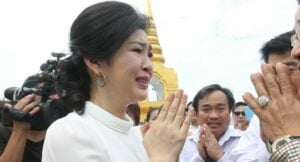 Finance Ministries being urged to back small-medium businesses and agriculture

The cabinet is stacking on the workload of Deputy PM Somkid Jatusripitak who will now oversee the activities of 11 economic agencies, following the recent reshuffle of the Cabinet.  If you really need to know the names of the ministries, here they are…

Part of the direction for the Finance ministries is to collaborate more closely with smaller to medium business and community outlets to support the sales of local products. The PM says that the ministry will have to find new markets for agriculture produce in support of Thai farmers. 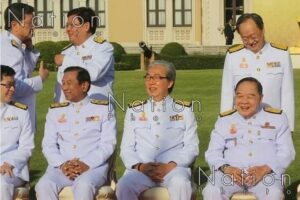 PHOTO: The Nation. Frivolity during a group pic of the new Thai Cabinet (is that guy in the background doing a fist pump?)

While the epic run, which aims to raise funds to purchase medical equipment for 11 hospitals, is premised on Thailand’s chronic medical budget crisis, the ruling government has been responding by repeatedly calling for donations to Artiwara’s project, oblivious to the irony.

Several government bodies, including Parliament, have run matching donation campaigns in support of Artiwara’s run while Prayut personally gave an undisclosed sum to the rocker yesterday.

Holding the singer’s hand, Prayut praised Artiwara for participating in the government-promoted schemes, from Thailand 4.0 to volunteering in tribute for the late King Rama IX.

While claiming there is not enough money to fund public healthcare, the military-installed government has been criticised for finding funds for substantial spending increases on security, in particular military hardware. Meanwhile, the government has encouraged people to voluntarily donate to charities that keep essential programmes, such as healthcare, on life support.

Artiwara has so far completed 1,300 kilometres in his record-setting cross-country run, which started on November 1 in Yala. He made it to Bangkok on Sunday before taking two days off on medical advice. Donations have reached over 530 million Baht. 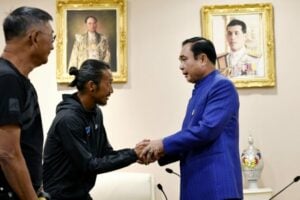 A sanctuary in the middle of the party town

The Wang Kee Aon waterfall is being re-opened today in the middle of Patong on the backroad. The waterfall had been smothered for years, blocked by development and new roads heading up the hill. But Patong Mayor, Chalermluck Kebsup has been raising funds to purchase the land in front of the waterfall. The area has now been reclaimed and the waterfall cleaned up to provide a little natural sanctuary in the middle of the party town. HRH King Bhumibol Adulyadej also paid a visit in 1959, which was an important early part of putting Patong on the domestic map for Thailand tourism. 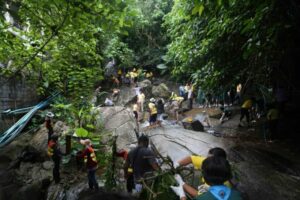 The Public are being urged to do good deeds for King Rama IX’s birthday, it’s a traditional day for people to turn out to donate blood. More than 300 policemen donated their blood yesterday morning and alms-giving ceremonies are taking place across the country as people follow in the footsteps of the late monarch who helped others throughout his life.

The National Blood Centre director says… “Donating blood is a selfless act. It’s giving without expecting anything in return.” 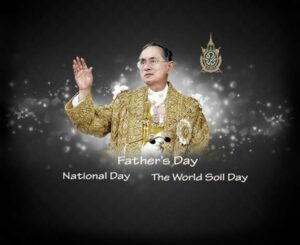 Your Daily Briefing is compiled from The Nation, Phuket Gazette and VOA.

Don says he knows nothing about Yingluck British passport