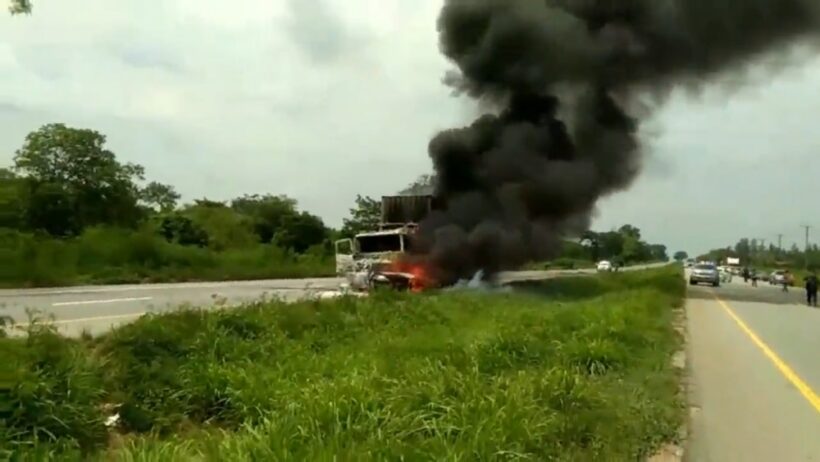 An 18-wheel container truck crashed into the rear of a NGV-fuelled car this afternoon (Sunday), resulting in an inferno that killed three passengers in the sedan in Chon Buri’s Phanat Nikhom district.

Following reports of the fatal crash at 12.30pm, Pol Captain Weerathep Thepchanthada led fellow officers and rescue workers to the scene on the Highway No 331’s Pattaya-inbound lane in Tambon Sa Siliam.

They found the black Honda Civic car still on fire and stuck to the 18-wheeler, and the car’s three occupants dead. The deceased driver was identified as 65 year old Sureeporn Thamthong while the other bodies were of an unnamed woman and a female toddler.

45 year old truck driver Songkran Naree, who surrendered to police at the scene, says he was driving from Chon Buri to Kabin Buri when he dozed off behind the wheel, sending the truck crashing violently into the sedan’s rear. The impact led to the explosion of an NGV tank in the sedan’s rear.

Songkran said he tried to put out the flames using the truck’s fire extinguisher, but it wasn’t enough.