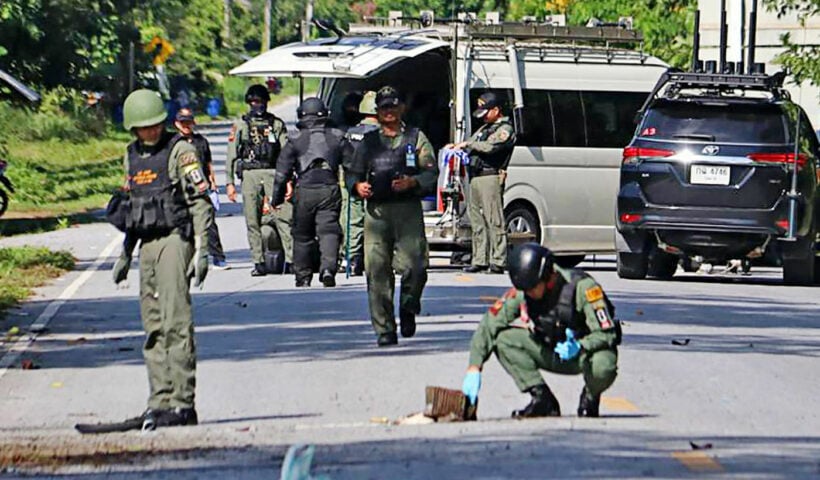 The 4th Army continues to hunt down suspects responsible for Tuesday’s brutal gun attack on a security checkpoint in Yala’s Muang district. The attack left 15 village defence volunteers dead and five others injured. The attack is believed to be a retaliation for extrajudicial killings of two insurgent suspects in Pattani’s Sai Buri district last week, according to a source.

Gunmen attacked and killed 15 people at the security checkpoint in southern Yala Province late on Tuesday night. The victims’ weapons were stolen in the raid. Security officials say there were at least 10 attackers. They approached on foot through a rubber plantation to attack a defence volunteer booth at about 11.20pm.

Eleven locals, mainly defence volunteers, were shot dead. Four wounded died later in hospital. Three other are being treated and remain in hospital. Only two volunteers survived unharmed. The dead include village and district officials and a police captain who was supervising southern border investigations.

The insurgents scattered road spikes, set fire to tyres, cut down a tree and bombed a power pole to prevent pursuit. This also hindered emergency services rushing to the scene. Three rescue vehicles were disabled.

Lt Gen Phonsak Phunsawat, the 4th Army chief, has offered condolences to families which lost loved ones in the attack.

The Thai PM Prayut Chan-o-cha has also condemned those behind the attack has asked security officials to rethink strategies in the region.