Green sea turtles are among just a select few animals that take a long journey back to their birth place to lay the next generation of eggs. But what happens when their birth beach is no longer a nesting place but something else instead? In the Maldives, a female sea turtle’s homecoming was now an airport! Not too suitable for the laying of delicate turtle eggs.
Without a choice, with nature instructing her to lay the eggs on the same spot she’d emerged as a baby turtle, the poor reptile made the runway its nest on Maafaru island.

“Despite the unfortunate circumstances that befell the turtle mother, she is reportedly in good health and was released back into the ocean by locals,” wrote local news website The Edition.

The incident has sparked fresh debates on the environmental and social costs of the Maldive’s tourism-propelled growth (sounds familiar?).

“The question remains on how much of Maldives’ biodiversity must be sacrificed in order to propel our country forward industrially and economically,” the website said.

The airport,  which has a 2.2 kilometre, 40 metre-wide runway, was inaugurated in August last year. The UAE-funded project was built on Maafaru, one of the inhabited islands of Noonu Atoll, which is a traditional nesting place of the marine turtles.

Once a green turtle hatches and heads into the ocean, it rarely returns to land. When they reach sexual maturity, they travel long distances to go back to their natal place to mate and lay eggs.

The green turtle (Chelonia mydas) is on the list of endangered species of animals by the International Union for Conservation of Nature (IUCN). 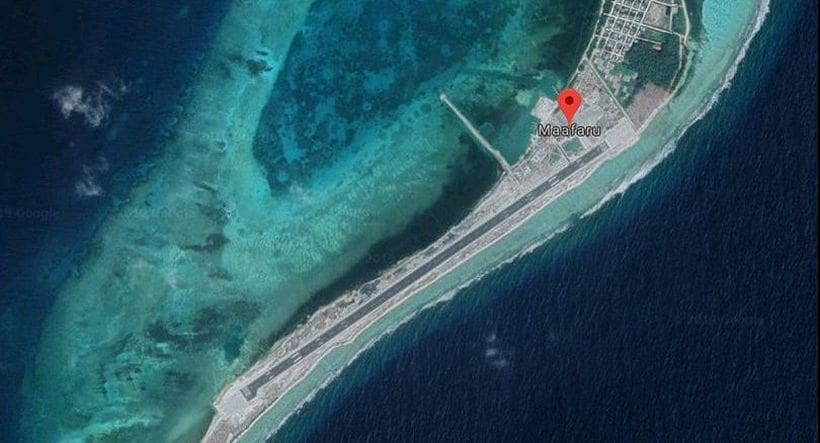