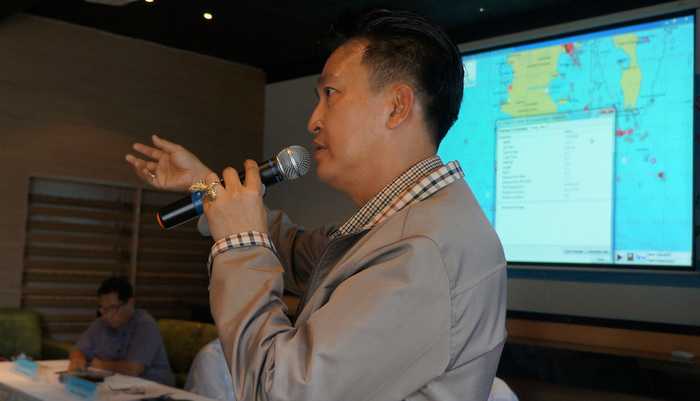 Instead of small yachts needing to carry only AIS receivers, as Mr Phuripat told the Phuket Gazette last week (story here), the Marine chief told a meeting of yacht owners at Royal Phuket Marina yesterday that all foreign-flagged vessels would be required to carry AIS transceivers, which transmit data of the boat’s location, direction and speed, among other details.

The higher requirement also extends beyond the remit of the official order signed by Phuket Governor Maitri Inthusut on September 2, which states that all foreign yachts are to install “AIS Class B system or higher class appropriately”.

“This applies to all foreign yachts, including cruising and sailing yachts,” Mr Phuripat said. “The AIS must be on at all times while the yacht is in motion.”

However, Mr Phuripat said that his office was willing to be “flexible” in enforcing the new regulation.

“For boats that arrive in Phuket with captains who don’t know about this order, we can give them about 10 days to obtain an AIS transceiver,” Mr Phuripat explained.

“But those who ignore our repeated requests will be charged for disobeying an order issued by the National Council for Peace and Order [NCPO], which carries a penalty of up to six months in jail.”

Mr Phuripat explained that he would sign into effect the same order for all Thai boats registered to carry 25 or more passengers “as soon as possible”. However, there are no plans for other Thai vessels to be required to carry AIS devices.

Several foreign yacht owners told the Gazette that they understood and supported the move to improve safety on the water, but questioned why a great majority of Thai-registered boats would not be required to carry AIS devices.

“I agree with it, but it’s very short notice,” said Swedish expat Goran Jonsson, who owns a 63-foot private yacht and has lived in Phuket for more than a decade.

Mr Jonsson explained that the one-month deadline presented difficulty for foreign-flagged boats being issued Maritime Mobile Service Identity (MMSI) numbers – and then the boat owners must obtain the hardware and have it installed on the boat.

“The hardware is about 35,000 baht fully installed, but it will take some time to get it to Phuket and then install it,” he said.

“The strange thing is that, if this is for safety, why [does it] apply only to foreign boats? Even if the foreign boats have AIS installed, the captains cannot see the Thai boats on the system because the Thai boats will not have it. On the water, the same rule should apply for all ships.”