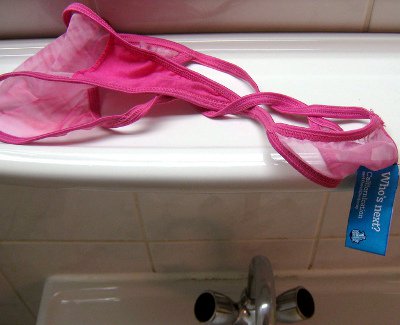 PHUKET: A politician is in trouble in Nakhon Sawan Province after getting caught stealing more than a hundred pairs of women’s panties from a hospital – and wearing them to work.

Mr Sarot, who is a member of Sa Thale Subdistrict Administration Organization, said he was too embarrassed to buy them himself, so he took to stealing them from Khai Jira Prawat Hospital.

The pervy politician got away with months of panty-pinching – until one of his victims caught him red-handed.

The woman, whose name was not reported, said she had been spending most of her time at the hospital over the previous month because of a sick relative there.

She had been washing and drying her clothes, along with other patients and visitors, on a clothesline next to a football field beside the hospital.

But when some of her panties, as well as those of other women, had gone missing she began to suspect a thief was at work.

Then on October 27, she spotted Mr Sarot walking back and forth around the clothesline and behaving in a suspicious manner.

As she watched him, he started plucking panties off the line, so she shouted for help.

Some soldiers and other female victims of Mr Sarot’s thievery chased him as he fled toward his pickup truck. They detained him until the police arrived.

Stashed in a plastic bag inside the truck were more than 100 pairs of women’s panties.

Mr Sarot later confessed to police that he had stolen panties from the hospital many times. He said he liked women’s underwear because it was comfortable.

However, he said he was too shy to buy panties himself so he started stealing them.

Mr Sarot said he looked for “cute” underwear with pretty designs on them. He said his favorite type was panties with fruit on them, which he “liked very much”.

Mr Sarot claimed his activities were not sexual, saying that he never sniffed them or used them to achieve orgasm.

Phuket protesters to bolster ranks of anti-government rally in Bangkok