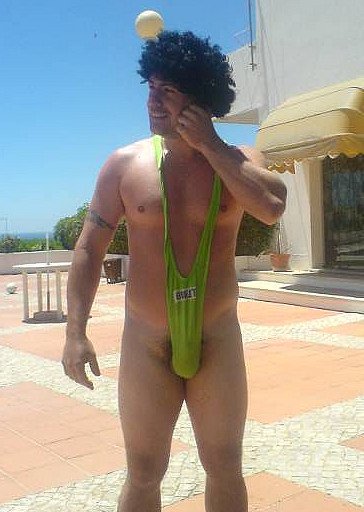 PHUKET: This week’s Weird World News roundup is about putting your product out there, whether it’s a poop machine in Australia, aged hardwood lubricant in the United States or a man’s pickle packaged in a mankini for the Olympics.

Those who thought Marcel Duchamp’s urinal art was pushing the limits, hold your nose because Australia’s most controversial museum has put the “poo-machine” on display.

The Museum of Old and New Art (MONA) in Tasmania has been dubbed “the subversive adult Disneyland” as it houses 400 works of art ranging from Egyptian mummies to pieces by Young British Artists, reports MSNBC.

But the most talked-about piece is the Cloaca Professional, labeled the “poo-machine”. It was built by Belgian artist Wim Delvoye to mimic the actions of the human digestive system.

A series of glass receptacles hang in a row with the machine being “fed” twice a day at one end. The food is ground up “naturally,” the way it is in the human body, and the device produces feces at 2pm at the other end.

As can be expected from personal experiences, the poo-machine also produces an overpowering smell.

“It put me off because of the overwhelming assault on the senses,” Diane Malnic, a Sydney-based accountant, told MSNBC.

“It definitely challenges your interpretation of what art is,” admits Ms Malnic.

There are many useless and bizarre things patented on a daily bases, many of these are used for things most of us would rather not consider, and yet another oddity hits the shelf and cannot be ignored: Whiskey Dick personal lubricant.

Brought to the general public by the creators of Epic Meal Time, famed for their pure gluttony, Whiskey Dick puts four years of hardwood-oak-aged whiskey into their bottle, reports The Huffington Post.

“Whiskey Dick is here to help you rise to the occasion. Aged 4 years in hard oak casks and promising a velvety smooth finish, this is truly the gold standard of booze-flavored personal lubricants,” says the Whiskey Dick website.

This “Old time bourbon-flavored personal lubricant and massage oil” is wrapped up in a Jack Daniel’s look-alike packaging.

“You’re welcome, world,” says “This Guy” from the promotional video.

Australian Olympic shooting gold medalist Russell Mark has found himself in a pickle – well, he’s actually squirming about the Olympic packaging for his pickle – after losing a bet.

Sharpshooter Mark missed his mark after pledging to wear the skimpy swimsuit made famous by the fictional character Borat in 2006 if Melbourne-based Carlton lost to St Kilda in the Australian Football League, reported Reuters.

Carlton suffered a shock four-goal defeat in the match last Monday night and Mark owned up to making the bet on local radio.

“Oh, I must’ve been intoxicated. Carlton promise so much and just deliver so little. It kills me,” the burly 48-year-old said on Tuesday.

“Anyway, a lot of people would think a mankini might look better than the uniform they’ve nominated for us, so I don’t know if it’s such a bad thing,” he added.

However, an Australian Olympic Committee spokesman recommended Mr Mark keep the mankini in the closet.

“Age is the problem here. Russell is no spring chicken, his days of being a model are long gone, and we don’t think it would be a good look for the team to have Russell in a mankini,” the spokesman told local media.

“Besides, this will be his sixth Olympics and he has a chance to be named as flag bearer. Imagine the flag bearer out in front of our team in a mankini. And a big, butch shooter at that.

“As we all know, the London weather is fickle and we would not want him to catch a cold,” he added.