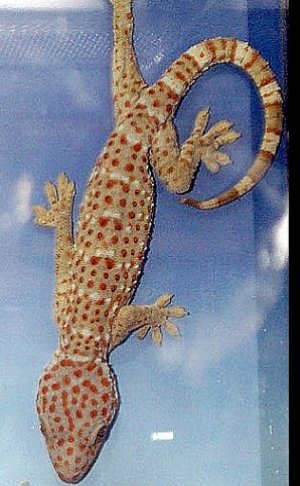 PHUKET: A NINE-INCH gecko is talk of the town in a village in the Northern province of Phayao this week – not for its size, which isn’t exactly unusual, but for its piety.

On February 27, one of the village families invited a monk to their home to hold a Buddhist ceremony of renewal.

The ceremony was interrupted halfway through – when villagers noticed the gecko hanging from a beam on the ceiling of the house’s porch.

Its front claws were pressed together in front of its chest – the traditional pose Thais adopt at religious ceremonies.

Khampan Suyata, 74, the owner of the house, said the whole family had gathered in the house at 7am for a life-renewal ritual in honor of himself and his 61-year-old wife Sri Suyata.

While carrying out the ceremony, they heard a clamor coming from downstairs and ran down to find the remarkable lizard.

The monk declared that the bizarre show of piety from the creature showed that the household was lucky.

Villagers who had come to join the ceremony said that just as the monk was sprinkling holy water on the heads of those taking part, they noticed that the gecko was stretching its neck out too.

With its back legs, the nine-inch lizard gripped a beam on the ceiling of the porch. It was holding its front legs in front of its chest in a prayer-like pose.

Mr Khampan said that geckos never came to his house. Strangely it was only when the family held a Buddhist ceremony that the creature appeared, he said.

Nan Suyata, Mr Khampan’s 55-year-old son, said he thought the gecko could be hosting the spirit of his own dead mother.

His mom, who passed away 30 years ago, might have come back to watch the Buddhist ceremony, he said.