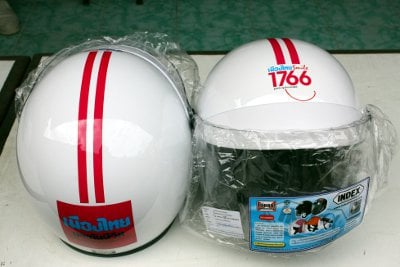 A MAN in Ang Thong province recently got a pass from the police when he was stopped on his motorcycle for not wearing a helmet – and there were no bribes involved.

Sombat Chiangkham, 37, told amused officers his head was too big to fit into a helmet. After taking the top-heavy gentlemen to their station and making him try at least 10 different sizes on, they eventually believed him.

The circumference of Mr Sombat’s head, at 68 centimeters, is 6cm larger than a standard XL-size motorcycle helmet, the largest type generally available in Thailand.

Mr Sombat was stopped at a police checkpoint on February 23 while riding his motorbike with his wife.

As neither was wearing any protective headgear, police told Mr Sombat they were charging him with riding a bike without a helmet and took him to Ang Thong City Police Station to be fined.

At the station, the sizably skulled suspect begged police not to fine him, saying he had never intended to break the law.

Mr Sombat said he was constantly getting stopped at checkpoints for riding without a helmet, but there was nothing he could do about it, as his head was too big to fit into any helmet available in stores.

Fortunately for the humungous-headed rider, police took pity on him.

Acknowledging that Mr Sombat didn’t intend to break the law, they agreed to treat his case as special.

They also agreed to investigate whether larger helmets were available on the market, and if so, to order one for Mr Sombat, who said he made only 300 baht a day.

They have forwarded Mr Sombat’s name to all traffic police in the area, telling them to treat his case as an exception if he is arrested again.

He said few companies made helmets bigger than that because they couldn’t sell them, adding that it was difficult to custom-make helmets for people with huge heads like Mr Sombat.

Weird World News: When love is just not enough