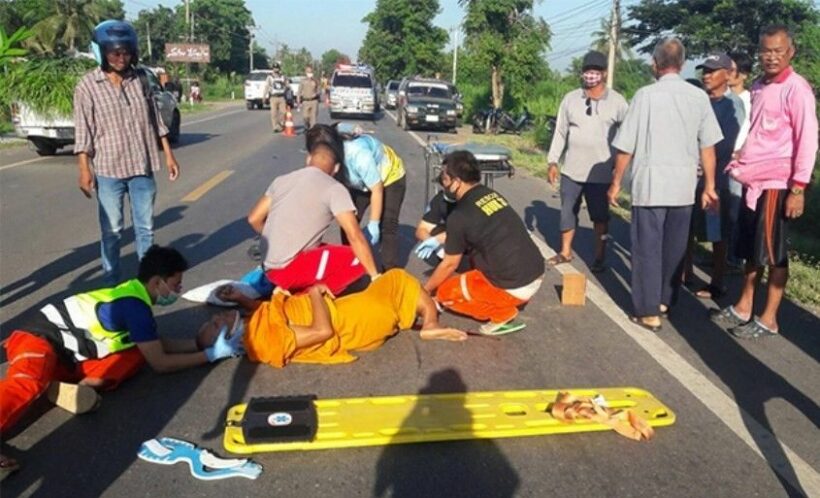 A 70 year old British expat has died, and a monk has been seriously injured, after the motorbike and sidecar they were travelling on was hit from behind by a pick-up truck. The collision happened in the north-eastern province of Nakhon Ratchasima, and is the second such accident over the weekend.

A report in The Chiang Rai Times says the woman driving the pick-up truck told police she was driving from Surin province to Nakhon Ratchasima, in order to pick up her sister, when she hit the sidecar from behind. The 70 year old driver, named only as David, died in the collision, while a 59 year old monk, Phra Wasant Boonkham, who was travelling in the sidecar, ended up with 2 broken legs. It’s understood the monk is the dead man’s brother-in-law, with David’s wife saying her husband was taking him to Wat Suntarikaram temple.

Police have launched an investigation into the incident.

Meanwhile, another man has died after an incident involving a motorbike, also in Nakhon Ratchasima province. 72 year old Sompong Khomeeklang was crossing the road in the Phimai district when he was hit by a motorbike. He sustained a broken neck and died at the scene.

Witnesses report the bike was being driven at high speed, with the male driver and female pillion passenger injured in the collision. They have been admitted to Phimai Hospital for medical treatment and their identities are not yet known.

Buriram man drowns after being struck by lightning