A separate issue has arisen in the case of the controversial buildings on the slopes of Doi Suthep in Chiang Mai. Building engineers are pointing their fingers at the steep slopes around structures that were initially built to be the residences of court officials in Chiang Mai province, saying they’re a potential natural disaster waiting to happen.

There are “significant risks of natural disasters” at the controversial site where court officials’ residences are being built at the foot of Chiang Mai’s Doi Suthep Mountain, a team of experts has concluded after a site inspection.

“They should be dismantled fast so as to pave the way for environmental rehabilitation,” Assoc Professor Chuchoke Aryupong, who heads Chiang Mai University’s Centre of Excellence in Natural Disaster management, said yesterday.

He was among experts who inspected the site with members of the Engineering Institute of Thailand (EIT) on Tuesday.

Court officials had planned to use the structures as residences, but because of strong protests from Chiang Mai people and |environmentalists and intervention by the government, it has been agreed that the buildings will not be used.

Chuchoke said that even with little rain, there was clear erosion at the site.

“This is because the natural surrounding has been altered for the construction. If land was left as it had long been, soil texture would have been more solid. Erosion would have not been so clearly visible,” he said.

He said that there was a risk of landslides and structure collapse and as the area was surrounded by abundant forests there was also the risk of forest fires.

Bunchong Somboonchai, a lecturer at the Maejo University, said a huge amount of sludge had flowed from the site to the nearby waterways, which was damaging the local environment.

“There are so many withering branchless trees,” he said.

Bunchong also noticed the risk of collapsing structures at the site. 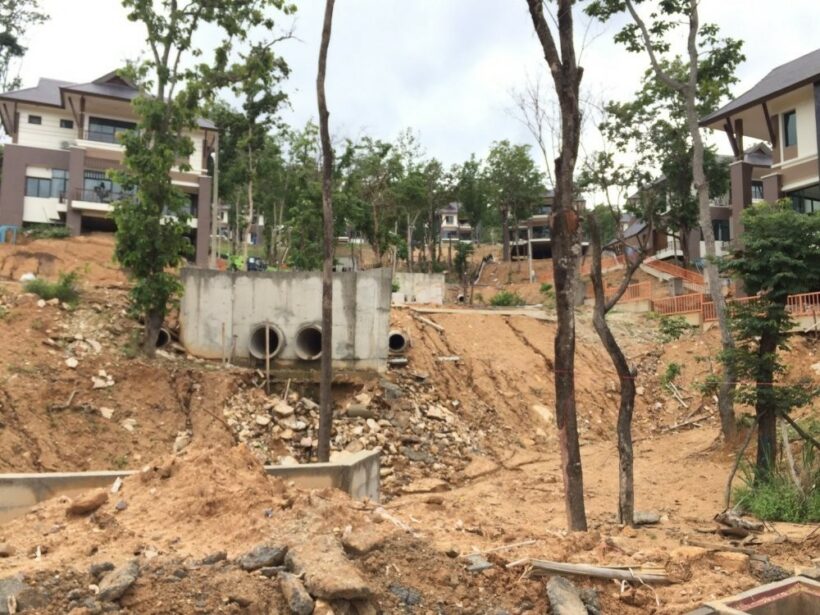