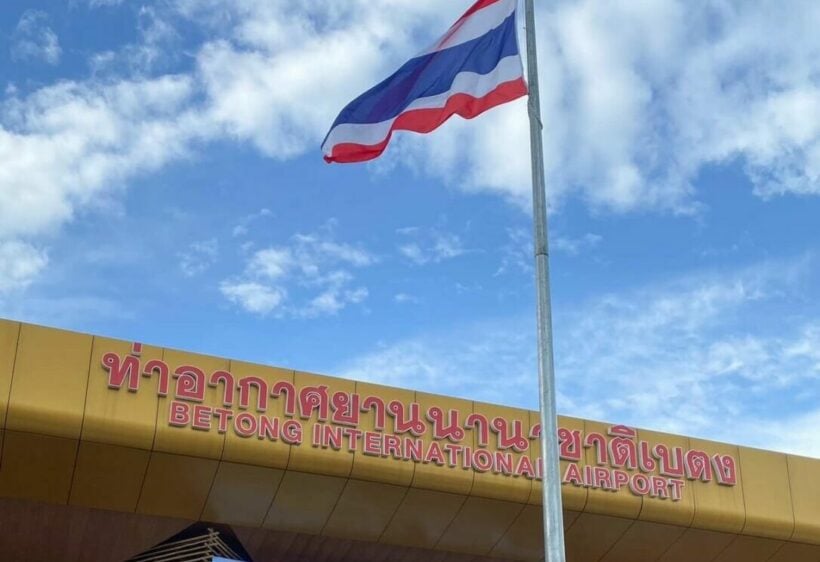 Less than 24 hours after PM Prayut Chan-o-cha arrived on the first flight into Betong International Airport to chair the opening ceremony, all scheduled flights in and out of the airport have been suspended. At present, it is not possible to book flights in or out of Betong and it is not yet known when flights will resume. The Tourism Council of Thailand, Nok Air and ticket sellers will meet on March 21 to discuss the future of flight schedules at Betong airport.

Only 10 passengers were aboard the first flight into Betong airport on March 14, including PM Prayut Chan-o-cha, who chaired the airport’s opening ceremony.

Less than 24 hours after the airport’s grand opening, a woman who booked a ticket for her daughter to fly from Betong to Bangkok on Friday, March 18 received a call to say Nok Air had cancelled the flight. However, no reasoning was provided to her. The woman was told she would be issued a refund in 45 days. She was advised that if she really wanted to travel, she could fly to Bangkok from Hat Yai Airport in Songkhla province instead, around a five hour drive away through difficult terrain. Yesterday, many people were left wondering why they couldn’t reserve tickets.

“Nok Air would like to thank the government for entrusting us to host the first flight from Bangkok to Betong on March 14 to facilitate tourism and stimulate the economy in the Southern provinces in line with the city planning project ‘Economic Triangle: Stable, Affluent, Sustainable’.

As you know, Betong is the new destination of Nok Air, which requires a period of time for marketing support from the government and private sector is essential. With only a short time for marketing so far, few passengers than expected purchased tickets. Operating costs are high, especially the cost of jet fuel and various fees related to flight operations.

In order to reduce the risk of not being able to cover the expenses, Nok Air has cancelled flights between Don Mueang Airport and Betong Airport on March 16 and March 18 2022. The airline will take responsibility for anyone affected by these cancellations.”

While the government hoped that the opening of Betong airport would increase tourism to the three Southern border provinces, violence caused by the Southern insurgency which began in 2004 is still ongoing. The UK, US and Australian governments still advise against all but essential travel to Pattani, Yala, Narathiwat and Southern Songkhla province due to high levels of violence in the area.

Just last month in Yala province, a roadside bomb injured four police officers and on the same night, an assistant village headman was shot dead in Pattani province. On another day last month, two men in Yala province were wounded, one was shot and another had a bomb thrown at him. On January 28, 13 small explosions struck Yala town, injuring at least one person. Violence in the area is still rife and, for many years, has shown no signs of stopping, making the area an undesirable tourist destination.

Cathat
that airport will be useful to the government one way or another long term.nobody goes to all the trouble and expense involved of building a new airport complete with instrument approaches for no reason. the political situation in the area…

AdvocatusDiaboli
3 hours ago, Cathat said: when the political problems in the area are resolved for good As it has a religious factor involved here, do you really think this is going to be resolved any time soon? And yet to…

Soidog
15 hours ago, Prosaap said: Built it and they will come no research needed its get real hard to not see them as idiots  Stop looking. They are idiots.

Soidog
Doesn’t matter. Lots of money skimmed from building the airport anyway. It’s served it’s purpose
Leeshard
Not quite sure why it’s called an international airport. It can’t even get flights from Bangkok established. There are certainly not going to be any international flights in the foreseeable future, if ever. There aren’t any even to Nakhon Si…