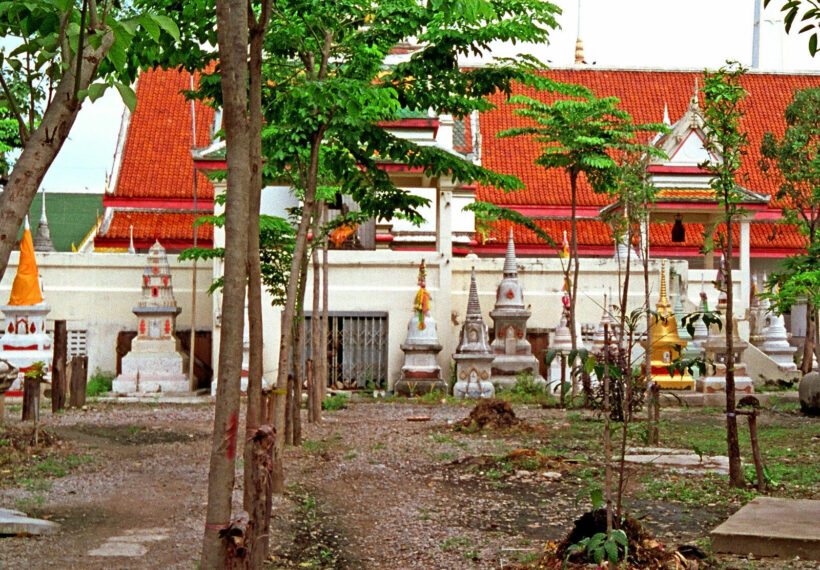 To fulfill a woman’s dying wish, townspeople in the Panthong district of Chon Buri hosted an elaborate banquet for ghosts in a local cemetery this week. The 36-table extravaganza was set up 43 year old Tanawan Choti. His mother had asked him to give a free banquet for all the ghosts of her friends and family that had died before her… a welcome party to the afterlife.

Tanawan honoured his mother’s request earlier this week before she passed away, with a no-expense-spared feast featuring food and drinks, luxury dishes and silverware, and entertainment for the ghosts of honour. Living speech-makers imparted their best wishes to the Chon Buri ghosts. The locals set up the 36 tables for a Chinese-style banquet and entertained the guests for about an hour.

A local event food service worker said that, despite years in the industry, this was the first ghost dinner he’d catered for. He said he found it “abnormal to serve the paranormal and was left with a ghastly feeling working in the cemetery”. (We figure there was quite a lot of food left over as well.)

While graveyards are not common in Thailand, since Buddhists cremate their dead, burials still occur amongst descendants of Chinese-Thai people. Regardless of religion or heritage, belief in ghosts or other paranormal phenomenon is common throughout Thailand. Spirit houses are frequently built outside local homes for ghosts to live in, and serviced every day with fresh offerings.

While the otherworldly banquet may be viewed by some with confusion or scepticism, the feast did have a real-world happy ending, Eakkaluck explained…

“After finishing the banquet ceremony, the food was given to poor people in the area as unfortunately, it appeared the ghosts could not actually consume earthly substances.”

“Mommy, there’s a snake!” – Expat in Phuket shares her story