The 13 members of the Mu Pa Football Academy, now recovered after their rescue from the Tham Luang caves last week, will sit down for a tightly-controlled media conference this evening.

“After the media conference, which will also be their last, they will return to their homes and try to live a normal life”, said the new Chiang Rai provincial Governor Prachon Pratsakun.

Prachon says the press conference is intended to provide a single opportunity for reporters from around the world to meet and interview the 13 members of the Mu Pa Academy football team, who were rescued earlier this month from depths of the cave in an operation that was watched around the world.

“We will allow all survivors to attend the press conference, because people around the world are curious to know the story from their mouths,” he said.

“However, from the discussion with the children and their families, the press conference will be the only official media interview with these children. There will be no more speaking with the press after this meeting, because we want to prevent intrusions to their privacy and being taken advantage of for their fame.”

The Governor warned that anyone who failed to respect the agreement and later intruded on the survivors or their family members could be charged under child protection laws. 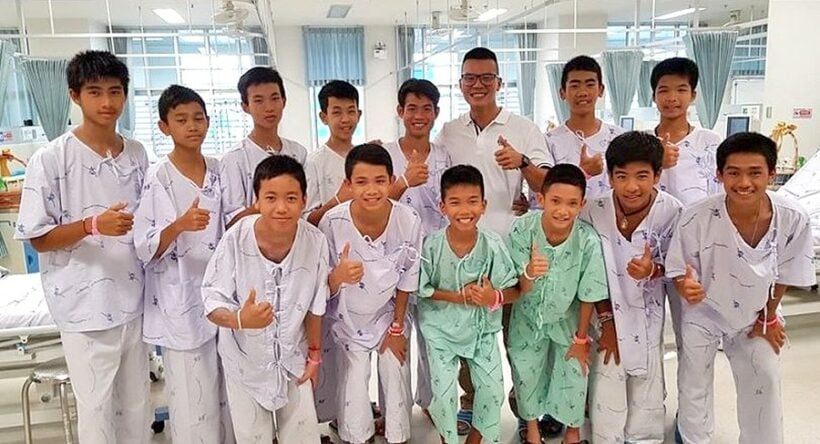 Only registered reporters will be allowed to attend the press conference at the Chiang Rai Provincial Administrative Organisation at 6pm today.

Journalists will not be permitted to directly ask questions of the survivors, said the governor. Instead, they must submit their questions to the Provincial Public Relation Office in advance to allow time for psychiatrists to screen them and ensure the questions are appropriate for the young survivors.

Prachon said the measures were meant to prevent inappropriate or sensitive questions being put to the children, which could affect their mental health recovery, considering the trauma they have experienced.

In questions submitted so far by Thai and international media, most wanted to know about the actual events that took place on the first day they ventured into the cave, and what else happened while they were trapped inside the cave.

However, that line of questioning is contrary to a recommendation by the Royal College Of Psychiatrists, which advised against any queries that caused the boys to recall any distressing experiences.

The press conference will be broadcast live through the governmental TV Pool programme “Thailand Move Forward”.

Prachon also said that progress to verify the Thai nationality of three stateless Mu Pa Academy members was being rushed, as all three had previously submitted their nationality verification request before the cave incident.

Nevertheless, he insisted that they will not get special treatment if they fail to meet the required qualifications for Thai nationality.

He also said that the globally renowned rescue operation at Tham Luang cave was a perfect opportunity for Chiang Rai to become a well-known tourist destination.

He revealed a plan to renovate the landscape around the cave to receive large-scale tourist visits, build a museum, and set up safety procedures for visitors to the cave, which “everyone wants to visit because it is now famous”.