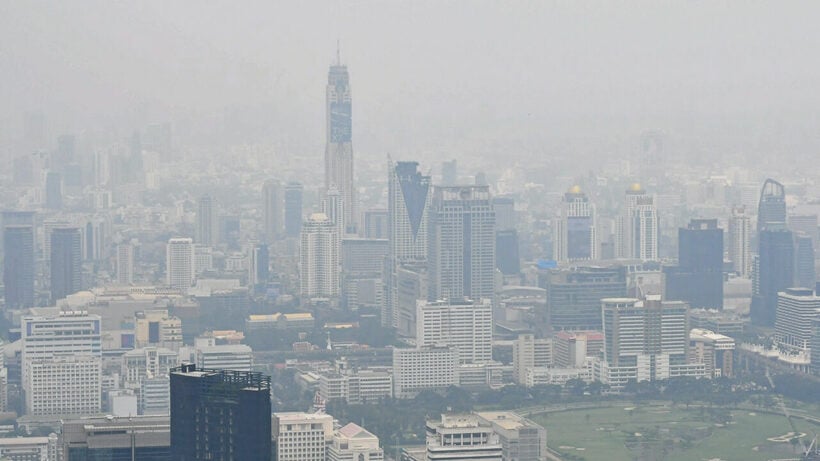 Poor air quality across Bangkok in the past week are not just caused by the PM2.5 dust. We can blame a ‘dust dome’ that is formed with low atmospheric pressure, dust and pollutants from the farmland waste burning, and greenhouse gases.

Natural Resources and Environment Minister Varawut Silpa-archa says that the pollutants come from “the improper disposal” of farming waste around Bangkok’s northern outskirts. He also asked provincial governors to ask farmers to avoid burring farm waste. If they refuse to cooperate, there might be an order to ban all outdoor burning activities in the future, while suggesting that farmers should sell their agricultural waste instead of burning it.

The mentioning of the agricultural sector being major contributors to Bangkok’s smog problems is a rare official recognition of the pollution ‘elephant in the room’.

People in Bangkok are also being encouraged to avoid outdoor activities and wear their masks when going outside to prevent both the pollutants and Covid-19. While “unhealthy level” of PM2.5 has been reported in many areas over the past week, the Department of Pollution Control is considering both short-term and long-term measures to tackle the air pollution problems.

Measures that have been rolled out include an extension of the work-from-home policy, lowering the price of low sulphur fuel in the capital and its vicinity, extensive monitoring of waste burning on farms, as well as offering higher prices for sugarcane products which were made in a sustainable manner.

For a long-term plan, the department is considering setting a new standard of air quality by lowering the “safe” threshold for PM2.5 exposure below the current level, but this is likely to happen in the next 5 years. Also, the government aims to apply the Euro-5 standard for vehicle emissions by 2024.

He also says that the pollution situation in Thailand has seen improvement after the measures were implemented. And, the number of days where [air quality] exceeded safe standards was less than 20% of the year.