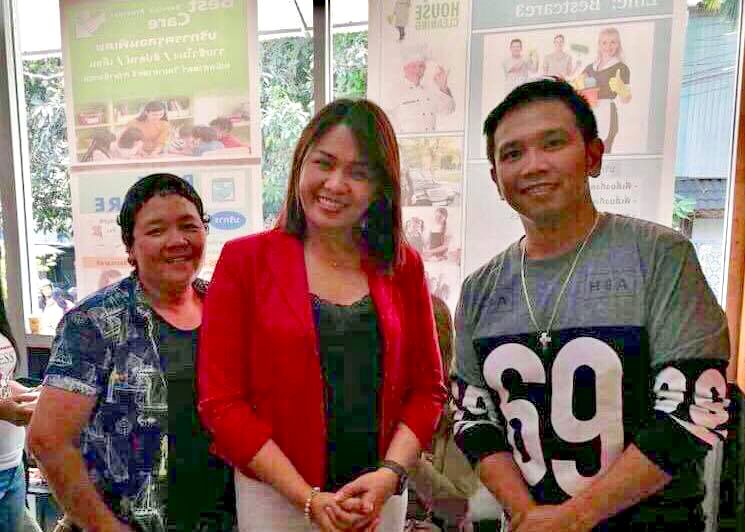 The administrator of a Facebook group SWD Kapamilya Thailand (has more than 30,000 Filipino members), Ernest Rey Basilio Salarza (aka. Rhey Keen Ayala), was arrested yesterday (Tuesday) in Bangkok after the court issued an arrest warrant.

At least nine Filipino have already been accused and arrested for posting allegedly fraudulent information to obtain funds by deception.

Many more victims are expected to file additional cases this week. The case started when Nokie of Best Care failed to provide visas and work permits to the Filipino victims. Each of them paid 33,000-38,000 baht to Best Care Provider.

16 Filipino victims have so far come out and sought help to get their money back. There were at least 30 victims who paid the same amount but never received the paperwork promised to them by Best Care.

Atregenio, aka. Nokie and Caroline Maxime are the owners of Best Care, while Salarza popularly known in social media as Rhey Keen Ayala is one of the company founders.

Meanwhile, Emily or ‘Em Fabe’ is the promoter of the company using her Facebook group SWD Kapamilya Thailand. Rhey Keen is also the administrator of Pinoy ADOBO Facebook group which is also being used to promote Best Care Provider.

A string of criminal cases under the Thai Computer Crime Act are also expected to be filed against Em Fabe and Rhey Keen for alleged libellous comments and personal attacks on Facebook against other Filipinos.