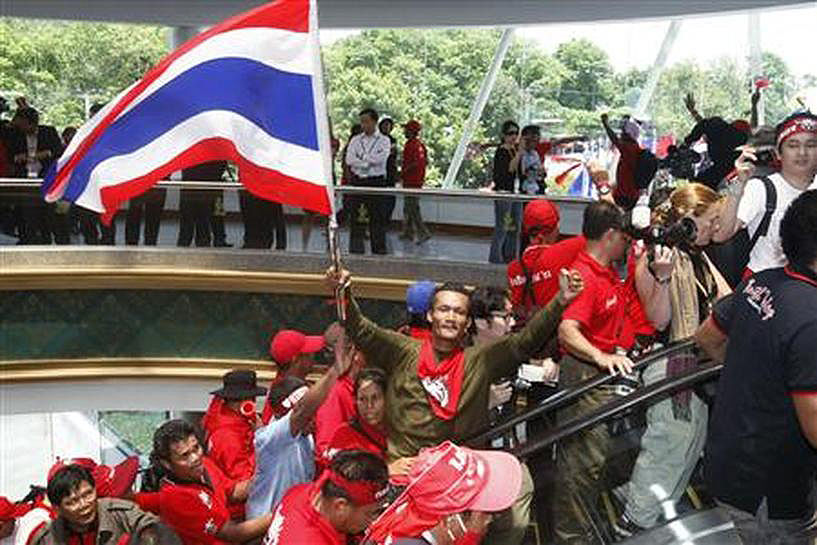 PHOTO: A decade ago when Red Shirts stormed the ASEAN Summit in Pattaya – Reuters

Passionate remnants of the former red-shirt (pro-Thaksin Shinawatra) movement are considering their situation after this weeks’ handing down of a long sentence for some members’ involvement in protests at an ASEAN Summit a decade ago.

Three former members of the United Front for Democracy Against Dictatorship, (aka. the red-shirt movement), were sentenced to four years in prison without parole by the Supreme Court for the 2009 protest that forced closure of the ASEAN summit in Pattaya.

A summit of Asian leaders in Thailand was canceled on Saturday after anti-government protesters swarmed into the meeting’s venue, renewing doubts about the durability of the government – Reuters, April 11, 2009

The three were among 13 former red shirts on trial for their roles in the high-profile disruption. The trio failed to show up when the Supreme Court’s verdict was read on September 11, claiming that they didn’t receive notification.

On the same day, the Supreme Court gave them four years in prison without parole, after finding them guilty of disrupting the ASEAN Summit – a situation that required all international summit leaders to evacuate Pattaya. None were present when the verdict was read and arrest warrants have been issued to round them up and send them to prison to serve their terms.

All have been blacklisted by Immigration to prevent them from fleeing abroad.