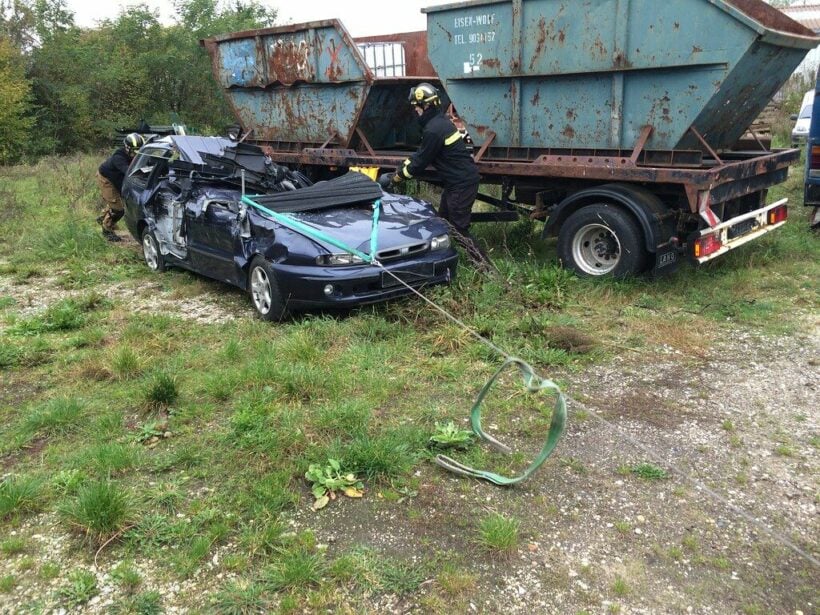 2 men were killed and 1 was injured in an early morning accident after their car rear-ended a container truck in Thailand’s southern province of Songkhla. The crash occurred at 12:30am in Rattaphum district at the Khuha intersection on the main highway in tambon Khuan Ru, according to the district’s deputy investigation chief.

The car, a Honda City, with Bangkok license plates, hit the back of a cargo truck and became wedged under its tray, trapping 2 people in the back seat and killing them. Rescue workers used a hydraulic jack to open the car and remove the bodies. The victims of the accident are thought to be migrant workers, as investigators found construction tools inside the wrecked car.

The car hit the container truck after it had stopped at the Khuha intersection, with investigators saying they believe the driver had fallen asleep at the wheel. Officials did not say whether the driver of the truck was injured, but did say they would call him in for questioning.

Meanwhile, a teenage scout drowned yesterday after jumping in a swamp during a mock war with teachers who were throwing rocks at the students, acting as if the stones were bombs. The teen was later reported missing when he did not return home. It took divers 4 hours to search the 3-metre deep swamp and find 15 year old Noppakao Sita’s body.

Police say the Wat Na Ban Kor School in the Isaan province Kalasin had sent the students out to the nearby swamp for scout activities. Reports say teachers were throwing rocks at the students. The students pretended the rocks were bombs and jumped into the swamp, dodging the stones. Police suspect Noppakao did not know how to swim and was forced to participate in the activity. At around 2pm, people noticed that Noppakao didn’t return home, and reported him missing to police 6 hours later.