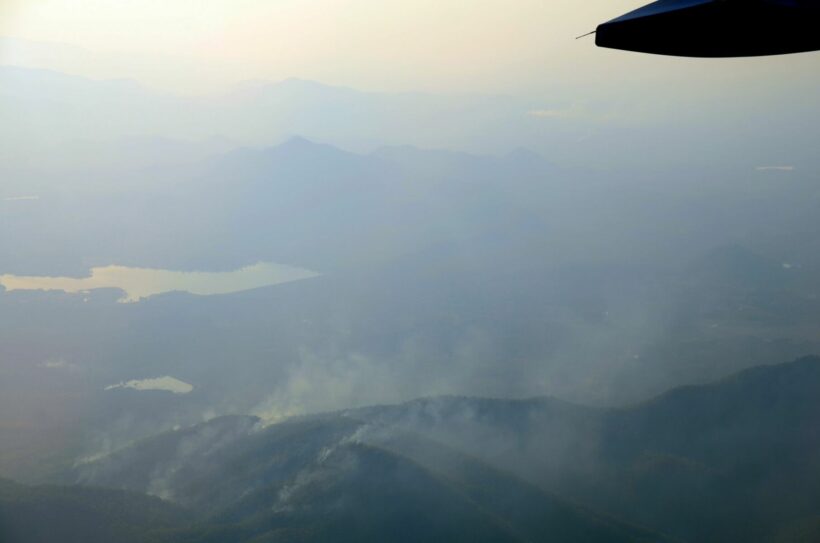 Brush fires are raging on in Thailand’s northern Chiang Mai Province as air pollution soars. Firefighters say they are struggling to put out the fires which line the Suthep-Pui National Park. A KA-32 helicopter has been brought in to help contain the fires after they spread fastly through the bamboo forest. The helicopters have already put out about half of the fires with authorities saying the fires should be put out soon, thanks to the more than 200 people who have volunteered to help. A man has been detained in connection to the fires, but he has denied all allegations.

Meanwhile, air pollution is soaring in northern Thailand with Chiang Mai ranking again yesterday in the top 3 most polluted cities in the world according to IQ AirVisual. Just a few days ago, Chiang Mai was ranked first in the world for air pollution as Suwanchai Wattanaying Charoenchai, the director-general of the Department of Health, saying over 250,000 people have sought treatment for eye and nose issues due to the heavy smog blanketing Thailand’s northern provinces. Suwanchai says the excessive PM2.5 dust particles are causing an increase in those seeking medical treatment.

People with respiratory diseases are seeing an increase in symptoms, with young children and the elderly being the most vulnerable. Such ailments like asthma, eye infections and coronary artery disease have been attributed to the increase in pollution.

The cause of the pollution is mainly due to wildfires sprouting up as a result of open burning across the border in Myanmar forests and locally around northern farms in Thailand. The government has warned farmers to not burn the past year’s crops, but the issue still remains.

Over 250,000 receive eye and nose medical treatment due to pollution in northern provinces