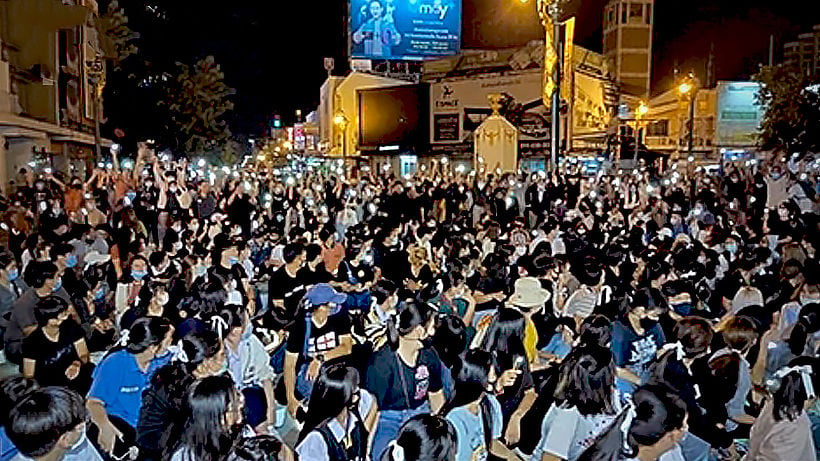 Khon Kaen, 1 of the “big 4” cities of Isaan in Thailand’s northeast, saw a brief anti-government demonstration in its central district last night, the second in 3 days. The rally at the democracy monument on Srichan road in the Khon Kaen municipal area started at around 9pm. A group of students and and supporters of the Free People group called for PM Prayut Chan-o-cha to resign and dissolve parliament, the writing of a new Constitution and an end to the state harassment of critics of the government.

Key members of the northeastern branch of the Free People group took turns delivering anti-government speeches on the stage before Suradet Kaewkalaya, a former election candidate from the Samanchon Party, read out a statement demadning an end to intimidation of the people, the government’s legal action against its critics, inequality in education, inequities in the justice process and the “plunder of natural resources”.

“We want rights and freedom and human dignity because we are not slaves. We want a democracy which belongs to the people. We want equality in education and true justice in the judicial process. We want the decentralisation of power and the right of communities to manage their own resources. We want a new democracy and society.”

The rally continued with speeches by core members of the group and live music.

The demonstration, watched by police and other authorities, wound down at around 10pm.