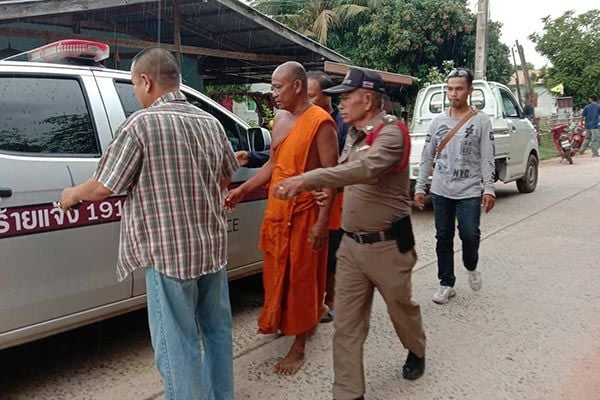 A Buddhist monk who stabbed a pregnant woman to death has been ordered to apologise by the woman’s sister. The monk, named as 57 year old Phra Um Deeruenrom, was the abbot of Wat Ban Nong Bua, in the northeastern province of Buriram, until his arrest and defrocking. He has confessed to murdering the woman, who it’s understood he was having an affair with.

The 33 year old woman, named only as Lamyai, was 8 months pregnant when the abbot deliberately drove a van into a pickup truck being driven by her husband and in which she was a passenger. Following the collision, Lamyai escaped from the truck and attempted to flee, but was chased down by the monk, who proceeded to hack at her with a long knife. She died of her injuries at the scene.

It’s understood Lamyai and the monk were involved in an affair, according to accounts given to police by villagers, and she had been blackmailing him, saying she would tell people he was the father of her unborn child. According to a report in Nation Thailand, the dead woman’s sister, Mai, says she is struggling to understand how a spiritual man respected by the Buddhist community could commit such an act. She is insisting he apologise to her family, saying they will be unable to organise a funeral for the dead woman until he does so.

Police have charged the man with pre-meditated murder.

Monk chases pregnant woman and kills her in Buriram