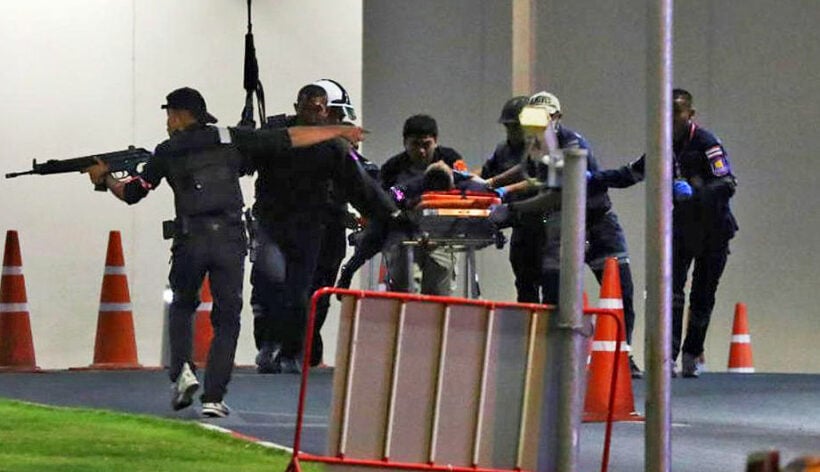 A Saturday afternoon bloodbath by a crazed Thai army soldier in a crowded shopping mall in Nakhon Ratchasima, north east Thailand, came to a predictable end when the elite ‘Hanuman’ squad cornered and shot the gunman around 9am this morning. It followed many hours of tense negotiations interspersed with gunfire. The gunman’s death ended 17 hours of random shootings and the deaths of 27 people (including the gunman). The entire incident caused by an aggrieved 32 year old soldier whose sole motive, at this stage, appeared to be a disagreement over money with his commanding officer.

The argument with his commander, 48 year old Col. Anantharot Krasae, and his subsequent shooting around 3.30pm yesterday afternoon, set up a train of unfortunate events that would eventually lead to the death of a reported 26 innocent lives and a trail of 57 wounded Korat citizens.

The identified soldier, Sgt Maj Jakrapanth Thomma, who acted alone as he set about on his shooting spree, started by first killing his commanding officer at the 22nd Ammunition Battalion, and then a 65 year old woman, named as Anong Mitrchan.

He then attacked a guard at the Surathampithak army camp, shooting the soldier and seizing his HK attack rifle. He then grabbed a cache of weapons including rapid fire weapons, ammunition, grenades and a Humvee 4-wheel drive. He was clad in camouflage gear and a helmet.

In what appears to be a spontaneous and unplanned series of events, he then drove out of the barrack’s back gate and headed to the Wat Pa Satharam, a temple on the outskirts of downtown Korat, where he killed and injured guards who tried to stop him.

Hey headed to the Terminal 21 shopping centre, in the middle of Korat, a drive of some 14 kilometres, shooting people along the way. When he got to the shopping mall, he casually strolled into the building firing indiscriminately at hundreds of shoppers and mall staff.

In the following hours, before the Bangkok-based Hanuman special operations squad arrived by helicopter, he moved around the seven floors of the shopping centre, taking hostages and shooting people at random. People hid wherever they could.

Facebook unwittingly became one of the shooter’s weapons as the gunman live-streamed his crazed assault. Facebook, after being contacted by the Department of Digital Technologies, took down the streams and his many posts cataloguing the murderous rampage interspersed with a string of random comments.

“Nobody can avoid death”

“Being rich from taking advantage of others, do they think they can use money in hell?”

The sound of sporadic gunfire kept peppering the silence around the Terminal well into the morning. Mall workers and shoppers, trapped inside when he entered the building, crawled out from fire exits and glass entrances, staying low to avoid bullets. They kept escaping in small groups throughout the morning.

When police and army specialists finally located the gunman they attempted to negotiate with the man, but found their words returned with gunfire. A policeman was killed in the exchange of shots.

A final assault began this morning and police confirmed that the gunman was shot dead at 9am. Rescue workers then rushed into the building where they discovered the dead and escorted the injured and others out of the building to safety. Eight hostages were rescued when he was eventually killed – some were among the list of injured people.

Thailand’s Prime Minister Prayut Chan-o-cha, kept abreast of the situation throughout, announced that there were 27 dead and 57 injured. He announced that the casualties included 25 citizens, a policeman and the 32 year old gunman.

The mass shooting is the second shopping centre shooting in Thailand this year. On January 9, a masked gunman (a local school principal) fatally shot 3 people, including a 2 year old boy, injuring another 4, while he robbed a gold shop in the city centre of Lop Buri province. That man was arrested alive and awaits trial but has allegedly confessed to his crimes.