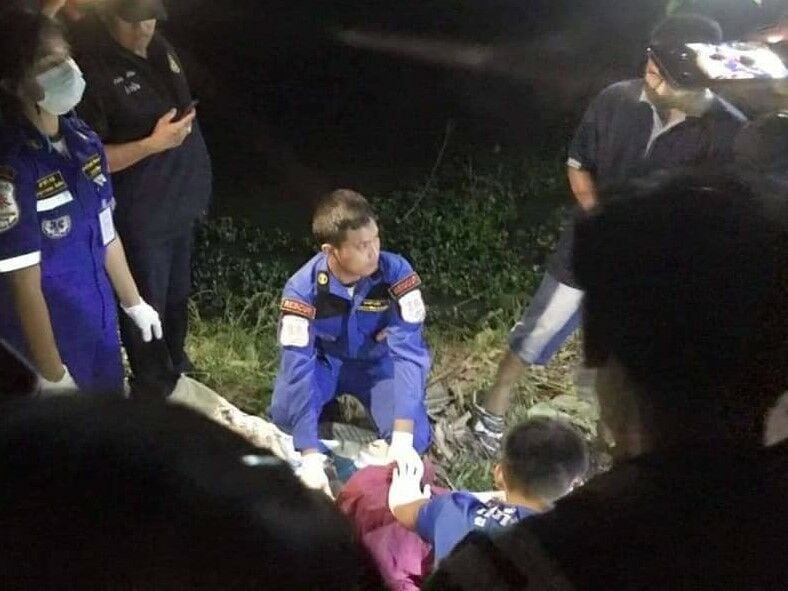 A northeastern Thai man has allegedly confessed to killing his wife by cutting her throat and then dumping her body into a public pond. The man allegedly told a relative what he did, who says she initially didn’t believe him. So she and her other relatives went to check it out, finding the woman’s body partially covered by a sack in the pond.

The family called the police in tambon Lak Muang in Kalasin province at around 9:30pm last night. An officer says they found the body of 29 year old New Kamalasai dressed in a pha thung, or wraparound skirt, and a red blouse. They say she had 13 knife wounds to her throat and some other head wounds. Police say her upper body was in a fertiliser sack tied with an electrical wire. Her hands were also tied with wire.

Investigators say Montri’s aunt told them the couple had a fight the night before and no one saw her around the village the next day. The auntie also said the couple often fought as Montri was an illegal drug user but she was shocked that he killed her. When police came to apprehend Montri, he was waiting at his home. Police say they found dried blood and a blood-covered machete in their bedroom.  Montri was taken into custody and is awaiting charges.

At least 25 people may face charges related to the death of a Thai model known as a “pretty.” Wichayaporn “Wawa” Wisetsombat died last month after working as a hostess at a private house party in Bangkok. Medical examiners say the 33 year old had methamphetamine, ketamine, ecstasy and diazepam in her system.

Wawa died at a hospital after working at party at a luxury home in Bangkok’s Chatuchak area. She had been hired to serve drinks. In a previous report by the Bangkok Post, doctors said she died from respiratory and blood system failure.

Ratsadon protester to stay in jail after court denies bail