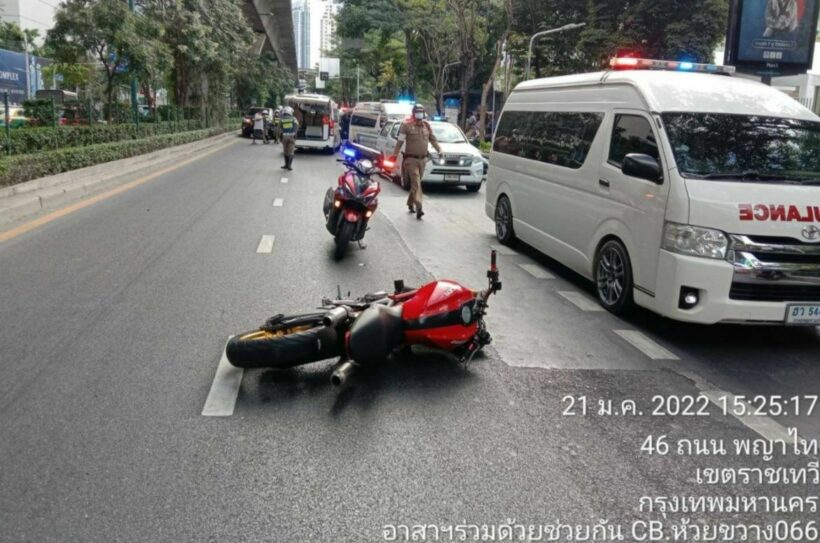 A Thai police officer has been charged with multiple offences after his speeding Ducati bike collided with a Bangkok doctor on a zebra crossing. The charges, filed by Phaya Thai district police, include reckless driving and not stopping for pedestrians at a zebra crossing. Dr. Waraluck Supavatjariyakul died after being hit by Naravich Buadok’s bike as she crossed Phaya Thai Road at around 3pm on Friday afternoon.

According to a Thai PBS World report, the incident took place in front of the Bhumirajanagarindra Kidney Institute Hospital. Dr Waraluck was an eye specialist who worked at Bangkok’s Ramathibodi Hospital and was crossing the road on a zebra crossing at the time of her death.

The deputy commissioner of the Metropolitan Police Bureau says Naravich has been charged with reckless driving, not stopping to allow pedestrians to cross the road on a zebra crossing, riding his bike to close to the left lane curb, and riding a bike on which road tax had not been paid. Jirasant Kaewsang-ek says Naravich, a riot control police officer, sustained minor injuries in the collision. It’s understood he has admitted all charges and visited the victim’s family to offer his condolences.

Meanwhile, after video of the incident did the rounds on social media, a statement from the Bhumirajanagarindra Kidney Institute Hospital has called on people to stop sharing photos and footage out of respect for the dead woman and her family.

Rain
1 hour ago, Faraday said: .....copper being charged. Doubt he'll do any time in the big house though.     More than likely reassigned and the story will fade from the obedient media quickly.
artray
But no charges of killing , causing death , etc ?????

steve860
19 hours ago, Jason said: If the policeman was going to an emergency with lights and sirens, you could understand. In that case the doctor would have heard and seen and not crossed the road. But this is just bizarre…
Leo
Ratchadapisek, especially after 9-10 pm, often turns into bike racing, especially for those big bikes. Something needs to be done about them.
RichardR
April 20 th. Shhhhhhhhhhhh can you hear te silence?????? Last news is februari then a fríendly smile and a Wai and shhhhh.