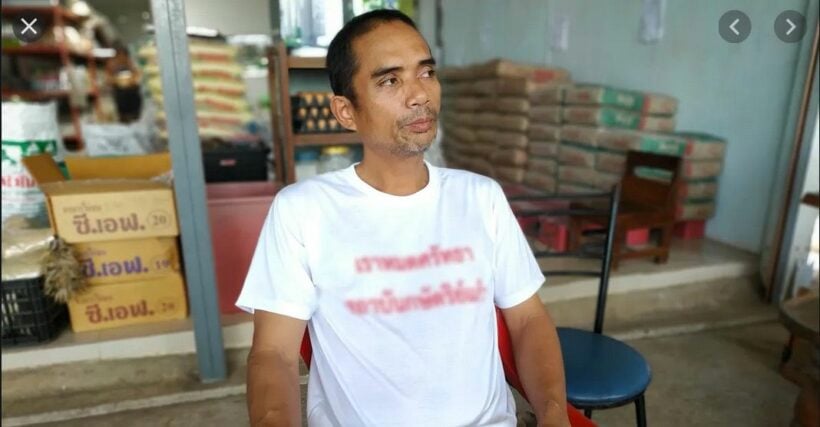 The chief of police in Khon Kaen province is denying any charges have been laid against an activist sent to a psychiatric hospital there in connection with a possible lèse-majesté crime earlier this month. Prachatai’s website reports that 47 year old activist Tiwagorn Withiton, who posted pictures of himself wearing a T-shirt with a message relating to the monarchy, is still at the hospital.

“It is a medical issue and he is being treated accordingly.”

The director of Khon Kaen Rajanagarindra Psychiatric Hospital says doctors still have Tiwagorn under observation and are yet to come to a conclusion on his mental condition. He says there is a time frame to consider under Thai laws on mental health, and doctors will consider whether his mental condition “responds to treatment during this time.”

He mentioned that Tiwagorn has responded well and relatives can visit him freely, just like other patients.

The director-general of the Public Mental Health Department says a patient’s admission to a psychiatric hospital can be done voluntarily, with the consent of family, or by a court order, and that Tiwagorn’s case was voluntary.

However Tiwagorn’s mother claims officials turned up at his home on July 9 to arrest him. She says although she was some distance away her son appeared to resist being arrested before being bundled into a hospital vehicle.

In a related story, His Majesty the King has already stated he does not want to use Thailand’s strict lèse-majesté laws, which make it a crime to insult or criticise the royal family, but PM Prayut Chan-o-cha says people should still be careful what they say about the monarchy.

Some Thais charged with lèse-majesté offences have fled the country. Political activist Wanchalearm Satsakit, who was allegedly abducted in Cambodia in June, fled Thailand in 2014 after he was charged with violating the Computer Crime Act for running a Facebook page critical of the monarchy and the military government.

The PM says he has no idea why some have fled. He says the lèse-majesté law has not been used for a few years, but there are consequences for distorting information about the monarchy.

Diplomats no longer exempt: will be subject to quarantine