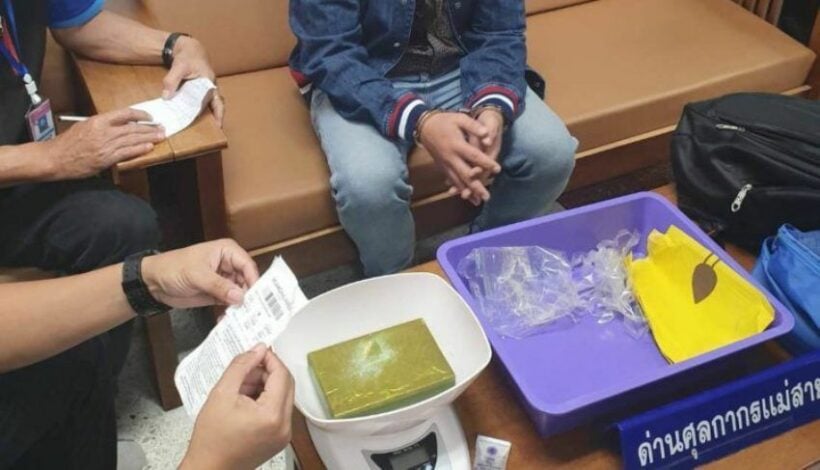 A man has been arrested in Chiang Rai’s airport attempting to smuggle heroin. 27 year old Jatuporn Saeuan was searched and detained before boarding a flight to Bangkok when security officers found his behaviour suspicious.

Security officers say Jatuporn “kept wandering back and forth in front of the entrance” to Mae Fah Luang Airport, so they asked demanded to inspect his luggage. His luggage was put through the airport x-ray and he went through the personal scanner.

When he raised his arms for the scan, they notised a yellow plastic bag tucked into the back of his trousers. Security staff opened the package and found it contained a white power. Test results quickly indicated the powder was a narcotic. and security called police.

Police told Thai media that Jatuporn admitted travelling to Myanmar to buy the heroin, sneaking across the border at Mae Sai, Chiang Rai into Myanmar’s Tachilek province. After buying the drug he sneaked back into Thailand with help from the dealer.

Jatuporn drove to Chiang Rai’s Mae Fah Luang Airport where he was subsequently arrested. He admits he planned to sell the heroin in Bangkok.

He has been charged with possession of an illegal narcotic with the intent to sell. Under Thai law, he could face the death penalty, though capital punishment is rare in Thailand. In reality he faces a fine of up to 100,000 baht fine and/or 10 years in prison.