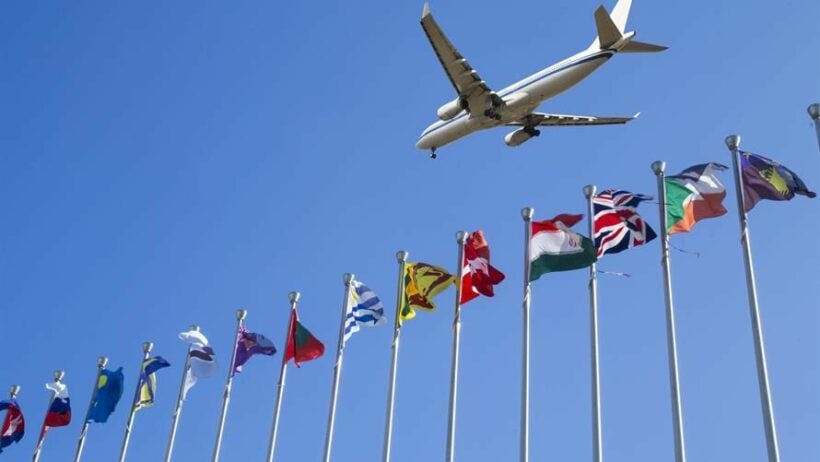 British Airways is suspending all direct flights to and from mainland China due to the Wuhan Coronavirus, making it one of the biggest international carriers to do so so far. The suspension comes after Britain warned against all but essential travel to the China on Tuesday.

BA.com, the airline’s website, shows no direct flights to China are available through February.

“We apologise to customers for the inconvenience, but the safety of our customers and crew is always our priority. Customers due to travel to or from China in the coming days can find more information on BA.com.”

Thai Airways is spray-disinfecting passenger cabins and cockpits on all flights returning from China and high-risk destinations.

“Because we have in-flight entertainment, the LCD screens are being touched all the time, so we deep cleanse every flight before departure.”

A video from Thai Airways showing staff in hazmat suits spraying down a cabin garnered praise on social media for carrier’s effort, although some were alarmed by it. South Korean budget carrier Air Seoul also announced it’s suspending all flights to China due to travellers’ concerns. United Airlines too is suspending 24 US flights to Beijing; Hong Kong and Shanghai until February 8.

Low-cost airline Thai Lion Air announced yesterday it has suspended all flights between Thailand and Chengdu in southern China until February 10. Other carriers, including Singapore Airlines and Cathay Pacific are allowing crew to wear masks on China flights. While American Airlines provides hand sanitiser wipes for flight attendants to use on all departures to China.

Meanwhile, passengers on some airlines still flying to and from China will have to make do without hot meals, blankets and newspapers.

Taiwan’s China Airlines said it’s encouraging passengers to bring their own beverage bottles and would limit reusable items by replacing them with disposables. The airline and its regional arm Mandarin Airlines stopped serving hot meals from Monday and replaced tablecloths and napkins with paper towels on Hong Kong flights. They’ve stopped providing blankets, pillows, towels, magazines and newspapers. Beverages and disposable headphones are supplied only on request.

“The seat back pocket will only contain the aircraft safety card and sick bag,” said Tigerair Taiwan, also a member of China Airline group, adding that duty-free sales will not be available.

Thailand, the top destination for Chinese holidaymakers, had 11 million Chinese visitors last year. But with 14 coronavirus cases, it is the second-worst hit country outside of China. The economic hit on Thai tourism is expected to be high.

Keep in contact with The Thaiger by following our Facebook page.
News Categories:CoronavirusTourismWorld
Related Topics:BABritish AirwaysCathayChina coronavirusCoronavirusflightssuspendedsuspendsThai Lion Air
Up Next China’s National Health Commission reports there has been 114 new deaths from the coronavirus outbreak bringing the death toll to at least 2,126. 16,433 people have now fully recovered around the world. Around the world, there are 31 new cases in South Korea now which puts them in the top 4 countries with confirmed coronavirus cases. Japan has 84, Singapore also 84 and now South Korea has reached 82 cases.

Thailand’s confirmed cases remain at 35 with no new cases announced since Sunday.

China’s national health commission also reported 394 new confirmed cases in the past 24 hours, significantly lower than the 1,749 new cases reported the day before. The latest confirmed number of cases is the biggest drop in almost a month.

South Korea reported 31 new cases of coronavirus on Thursday, bringing the number of people infected in the country to 82. Of the new cases, 23 cases were traced to church services that a 61 year old patient had attended in the central city of Daegu.

Yesterday, the Shincheonji Church posted a statement on its website confirming 10 of its members were infected by the woman who had attended services.

The US public network NPR reports that there are two basic approaches to stopping viral infections. One is to block an enzyme the virus needs either to make copies of itself or infect cells. The other is to make a monoclonal antibody, based on a recovered patient’s immune response.

Researchers around the world are already testing the first idea with an experimental, broad-acting antiviral drug known as Remdesivir, which works by “gumming up a virus’s ability to replicate”.

The drug is currently being tested in China on patients who have coronavirus (Covid-19). A study published just last week found that Remdesivir successfully reduced respiratory symptoms in rhesus monkeys exposed to another coronavirus that causes serious disease, MERS, or Middle East respiratory syndrome.

“We are currently testing 150 of them using cell-based culture. We are working with groups in the US and China.”

A group of Australians have landed in Darwin airport this morning after being evacuated from the virus-stricken cruise ship in Yokohama Bay in Japan. About 180 nationals and permanent residents had earlier left Japan on a chartered QANTAS jet.

The evacuees had been confined on the Diamond Princess cruise ship in Yokohama for the past two weeks. The ship had a total of 621 confirmed cases of the virus, the most in any single location outside of China.

The US Secretary of State Mike Pompeo has sternly denounced China’s expulsion of three Wall Street Journal reporters and is urging Beijing to respect freedom of the press.

“Mature, responsible countries understand that a free press reports facts and expresses opinion. The correct response is to present counter-arguments, not restrict speech.”

The move follows official complaints from Chinese authorities about the headline of an opinion article in the WSJ, which referred to China as the “Real Sick Man of Asia“* and a decision by Washington earlier this week to treat five government-controlled Chinese news organisations as foreign government functionaries. The move is seen as a likely tit-for-tat move by the Chinese after the US’s open criticism of Chinese media.

27 prominent public health scientists are pushing back against the steady stream of fake stories and even a debunked scientific paper suggesting a laboratory in Wuhan may be the origin of the outbreak of coronavirus. The scientists, from 9 countries, wrote their statement and were published in The Lancet yesterday.

“The rapid, open, and transparent sharing of data on this outbreak is now being threatened by rumours and misinformation around its origins.”

The letter does not openly criticise any specific assertions about the origin of the outbreak, but many posts on social media have singled out the Wuhan Institute of Virology for intense scrutiny because it has a laboratory at the highest security level, and its researchers study coronaviruses from bats, including the one that is closest to SARS-CoV-2, the virus that causes COVID-19.

Conspiracy theories have included the possibility that the “virus was bioengineered in the lab” or that a lab worker was infected while handling a bat and then transmitted the disease to others. Researchers from the institute have insisted there is no link between the outbreak and their laboratory.

The coronavirus outbreak that continues to paralyse China’s economy may have a silver lining for the environment. China’s carbon emissions have dropped by least 100 million metric tonnes over the past two weeks, according to a study published by the Centre for Research on Energy and Clean Air in Finland.

“That is nearly 6% of global emissions during the same period last year.”

Over the past two weeks, daily power generation at coal power plants was at a four-year low compared with the same period last year, while steel production has sunk to a five-year low, researchers found. 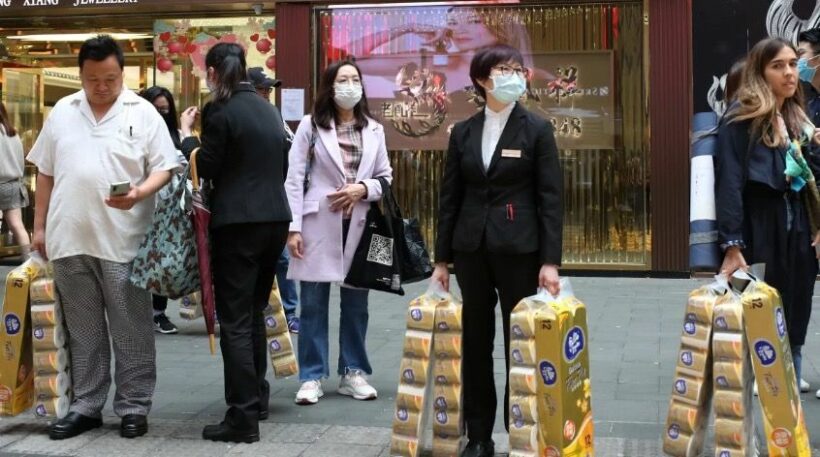 Photo: Shoppers with bags of toilet paper in Causeway Bay, Hong Kong. Hongkongers have been snapping up surgical masks and toilet paper rolls amid the coronavirus outbreak - SCMP

Hong Kong has been gripped by panic buying since the COVID-19 coronavirus outbreak, as frightened residents hoard essentials like rice and toilet tissue. Now, a third man man has been arrested there for his role in a bizarre toilet paper heist, as a gang aimed to clean up during a run of frenzied buying in the city.

The 26 year old man was arrested up during a raid at a guest house not far from the scene of the robbery, in which 600 toilet rolls worth HK$1,640 (6,575 baht) were stolen at knife-point early on Monday morning.

“We believe the trio thought the rolls would have [market] value and that they could profit by reselling them. They knew each other and one of them has a triad background.”

Police say the gang moved the toilet rolls in a trolley after the crime and that they anticipate more arrests.

At about 6am on Monday, three masked men stole 50 packets of toilet roll from a delivery man outside a Wellcome supermarket. Police say one of the men was armed with two knives.

Two people, aged 50 and 55, were arrested on Monday, and police said at the time they were seeking three others, thought to be aged between 20 and 30. Two of the arrested were guest house employees while the third was unemployed. 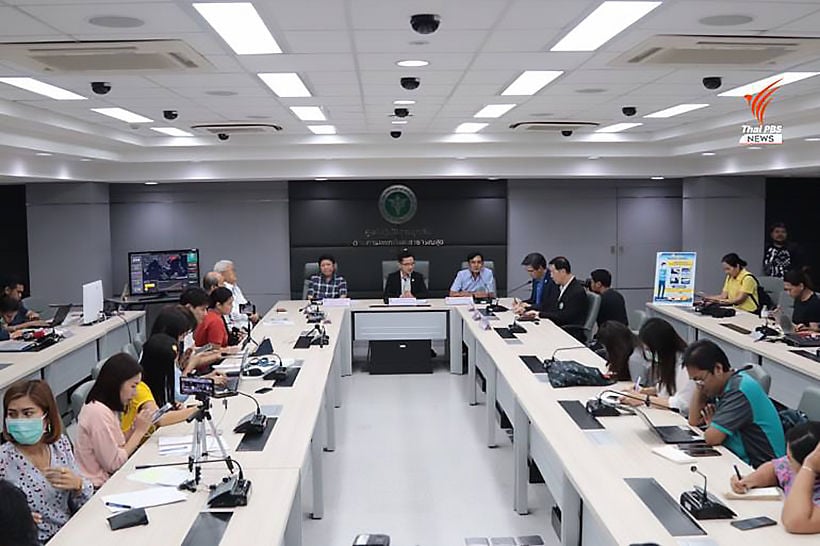