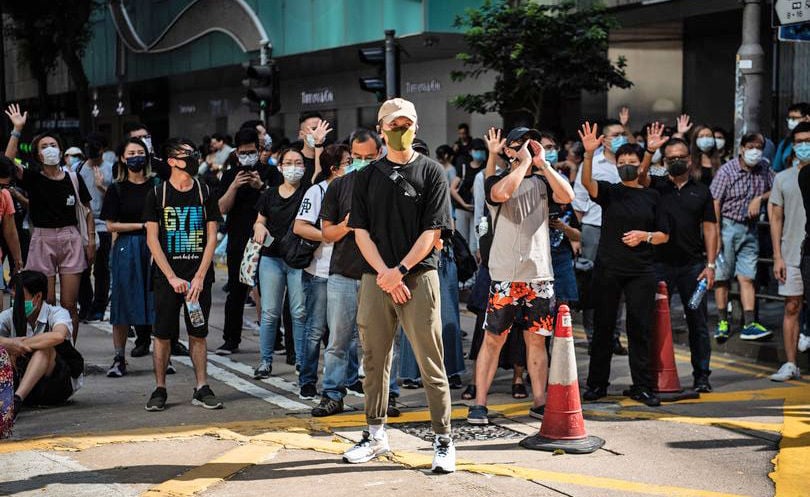 by Jerome Taylor and Jasmine Leung

Pro-democracy protesters have been marching through Hong Kong today in defiance of a ban on face masks as much of the city grinds to a halt with the subway suspended and swathes of shops and malls shuttered following another night of violence.

Hundreds of protesters, almost all masked, staged the unsanctioned march through the popular shopping district of Causeway Bay, a day after the city’s leader outlawed face coverings at protests invoking colonial-era emergency powers not used for half a century.

As the crowds were marching earlier today, city leader Carrie Lam released a stony-faced video in which she condemned protesters for “a very dark night”.

“We cannot allow rioters any more to destroy our treasured Hong Kong.”

But the march in Causeway Bay, which came despite the city-wide subway closure, showed protesters were still willing to defy the mask ban as they chanted “No rioters, only tyranny” and other popular slogans.

Hong Kong has been battered by four months of increasingly violent pro-democracy protests with tourism dropping, businesses shutting up shop and the Hong Kong leadership unable to quell the simmering tensions.

The rallies were ignited by a now-scrapped plan to allow extraditions to the mainland, which fuelled fears of an erosion of liberties promised under the “one country, two systems” model China uses for the finance hub. After Beijing and local leaders took a hard line, the demonstrations snowballed into a wider movement calling for more democratic freedoms and police accountability.

Lam continues to refuse any major concessions but is struggling to come up with any political solution that might end the chaos, leaving police and demonstrators to fight increasingly violent battles as the city tips into recession.

Hong Kong witnessed its worst clashes to date last Tuesday as China celebrated 70 years of Communist Party rule, with a teenager shot and wounded by police as he attacked an officer.

Yesterday, Lam used a colonial-era law to ban face masks at protests, but it did little to defuse tensions or, indeed, encourage protesters not to wear masks.

“The government doesn’t listen to us. So we are upping our game,” said 32 year old protester Nathalie, as hardcore demonstrators trashed a station in the previously calm neighbourhood of Tseung Kwan O.

In the northern district of Yuen Long, a plain clothes police officer opened fire when he was surrounded in his car and attacked by protesters, a petrol bomb exploding at his feet. Local media reported a teenage boy was shot and wounded in the same district but police would not confirm whether the bullet came from the officer’s gun.

City grinds to a halt

As the city awoke on Saturday, the rail network remained out of action – although the crucial airport service partially re-opened in the afternoon. The subway alone usually carries some four million passengers a day.

Shopping malls were closed, supermarket chains said they would not open and many mainland Chinese banks stayed shuttered, their facades sprayed with graffiti. In some locations, long lines formed at supermarkets as residents stocked up on rice, eggs, toilet paper and other essentials, fearing further clashes.

While the increased vandalism has shocked many in a city unused to such scenes, many more moderate activists say they still have sympathy for those using violence.

Singapore and Hong Kong have agreed to delay their travel bubble plans as Hong Kong experiences a jump in Covid-19 cases. Although case numbers in both cities are nowhere near as serious as what’s currently being seen in places like Europe and the US, officials are erring on the side of caution and postponing the plan by at least 2 weeks.

The travel pact would have allowed people to travel between both cities without having to endure mandatory quarantine, but authorities on both sides had agreed it would be postponed if either location reported more than 5 new local cases in a rolling 7 day average. The Bangkok Post reports that travel between both cities remains possible, but quarantine is still a requirement in both places.

Mungo Paterson, a British national who lives in Hong Kong and had booked a ticket to Singapore for December 7, says the reinstatement of the quarantine requirement is the biggest problem.

“That is the main deterrent, I have no interest in sitting in a hotel room for 2 weeks – it’s not healthy. I was excited when they announced it, I thought ‘here we go’. I’m now holding off confirming until Dec 2. I think there’s a 50-50 chance the flight will happen.”

Singapore Transport Minister Ong Ye Kung says the rise in cases in Hong Kong shows that any attempted travel arrangement will not be plain sailing.

“This is a sober reminder that the Covid-19 virus is still with us, and even as we fight to regain our normal lives, the journey will be full of ups and downs.”

The strict border controls seen in Asia appear to have helped countries here suppress the virus better than elsewhere in the world, but the controls have come at a significant cost, crippling tourism and the aviation sector. Rico Merkert from the University of Sydney’s business school says that, without international traffic, Cathay Pacific and Singapore Airlines will continue to struggle, even when the travel bubble between their 2 hubs does begin.

“Even if the Hong Kong-Singapore corridor opens, the boost to the 2 aviation hubs will be limited. Singapore Airlines and Cathay will continue to struggle because they can’t funnel onto the route those travellers who would normally arrive from Europe and the US. Without that feeder traffic, those bubbles will at best be limited to the local population. International travel is going to remain a tricky affair.”

October traffic for both carriers has plummeted compared to the same period last year, with Cathay carrying just 38,541 passengers, down 98.6% on 2019 figures. Singapore Airlines has experienced a similar slump, with October numbers down 98.2% on last year’s, at 35,500.

Brendan Sobie from Sobie Aviation says at this stage, the implementation of a travel bubble is mostly symbolic, adding that the aviation sector will take years to fully recover.

“Bubbles provide a little bit of incremental additional international traffic in the interim period until the pandemic ends. A full recovery in air traffic will still take a few years, even with a vaccine, though bubbles will help get the process moving.”

Links to continue to grow between the core Hong Kong protest movement and the current Thai protests. The alliance is being called “The Milk Tea Alliance”…milky orange-coloured sweet tea is popular in both Thailand and Hong Kong.

Democracy supporters in Hong Kong, Thailand and Taiwan are sharing their criticisms and demands for change against “regimes” they claim are stymying attempts at democracy and closing down freedoms of speech. ‘Thailand and Hong Kong Together’ is a new Facebook page which is helping to draw attention to the 2 protest movements and help the Thai protesters with donations of supplies and protection during the current protests.

The site has already gathered some 20,000 followers and is headlined “Can You Hear The People Sing”, a reference to the freedom anthem from the musical Les Miserable.

The Bangkok Post reports that around a dozen Hong Kong’s pro-democracy protesters were rallying outside the Thai consulate in Hong Kong last Monday showing solidarity with their protest peers in Thailand.

Holding banners bearing the message “Stand with Thailand”, the small group gathered outside the Thai consulate on October 19. Joshua Wong, one of the leaders of Hong Kong’s pro-democracy movement, was in the group. They chanted displaying the 3 finger salute gesture borrowed from the movie ‘Hunger Games’, which has become the symbol of the protest in Thailand.

Wong says that while people in Thailand continue to demonstrate, the “Milk Tea Alliance” should stand with them.

“We shall weather the authoritarian storm and reclaim our freedom, irrespective of the cost, the pain and tears ahead of us.”

Prominent Thai activist Netiwit Chotiphatphisal says that the Thai and Hong Kong protesters are facing similar challenges and can share their experiences, and tactics.

“Protesters in Thailand understand the importance of protecting themselves with hard hats and umbrellas, which are both iconic protest gear used by protesters in Hong Kong.”

“We also feel the threat from China in Thailand, so we know how people in Taiwan and Hong Kong feel. Even though the Milk Tea Alliance is an abstract coalition, we are now connected by a common vision.”

“The protesters are trying to make the Thai government look ridiculous and ruthless at the same time.”

Netiwit was referring to the Thai protesters almost intuitive use of social media and messaging as they play cat-and-mouse with Thai authorities and police, moving their protest locations and announcing fake locations for rallies.

Hong Kong airline Cathay Pacific is set to close its subsidiary, Cathay Dragon, with the loss of up to 5,900 jobs. The carrier, that used to be called Dragon Air before being absorbed by Cathay, has become yet another casualty of the Covid-19 pandemic that has decimated the aviation business.

The Bangkok Post reports that 5,300 jobs are expected to go in the airline’s Hong Kong base, with a further 600 axed overseas, accounting for 17% of Cathay’s total workforce. Cathay Dragon primarily operated short-haul routes within Asia, including direct flights from Hong Kong to Bangkok and Phuket.

Cathay Pacific bosses have hammered out a HK$2.2 billion restructuring plan that involves thousands of job cuts, pilots and cabin crew having to sign cheaper contracts, and total closure of its subsidiary carrier. The South China Morning Post describes the plan as, “life or death”, reporting cuts to a total of 8,500 jobs across the group. The parent airline is understood to be applying for approval to absorb Cathay Dragon’s routes into the Cathay Pacific network, as well as that of its low-cost carrier, HK Express.

Cathay Pacific CEO, Augustus Tang, says the restructuring plan is essential to Cathay’s future survival as the effects of the Covid-19 pandemic show no sign of abating.

“The global pandemic continues to have a devastating impact on aviation and the hard truth is we must fundamentally restructure the Group to survive. We have to do this to protect as many jobs as possible and meet our responsibilities to the Hong Kong aviation hub and our customers.”