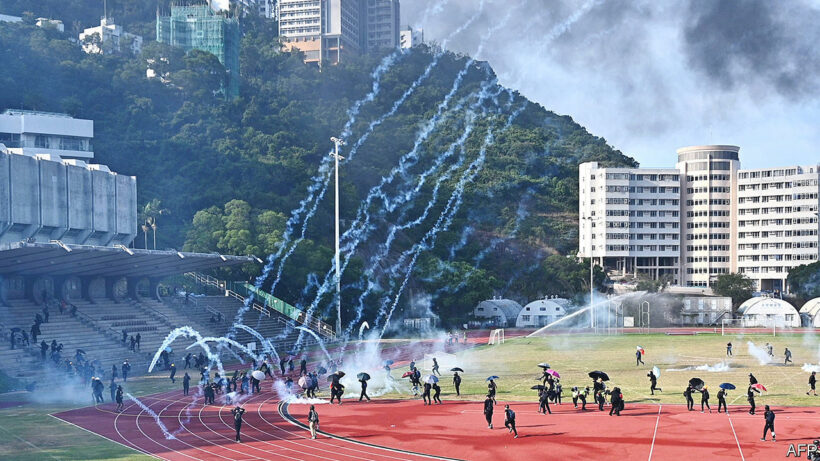 Hong Kong’s government has closed down kindergartens, primary schools and secondary schools for the first time yesterday in the wake of escalating violence on Monday and Tuesday this week.

Classes at the Chinese University of Hong Kong, which was the scene of protests and serious damage this week amid fires and petrol bombs thrown by protesters, is also cancelling classes for the rest of the term. Many students have already left the island.

The Stock Market, which up to this week had been surprisingly resilient in the face of bad media and localised violent demonstrations, finally succumbed. The mounting violence sent stocks tumbling as investors worried that the economy of the Asian financial hub could no longer ignore the events on the streets and the cascade of daily negative media and threats from Beijing.

As the violence continues to ramp up, moves into the centre of Hong Kong island from the territory’s peripheries, and now continues during the working week as well as the weekend, jittery investors are now seeing the problems out of their glass towers, not just on the nightly news.

Since the protests began, originally as a protest against a proposed (and subsequently withdrawn) extradition bill, became violent five months ago, Hong Kong’s stock exchange index, the Hang Seng (HSI), has fallen nearly 8%.

Police say 142 people are now in custody since Tuesday, bringing the total number of arrests to more than 4,000. The arrested protesters are putting pressure on police, prosecutors, legal representatives, families and the territory government.

Hong Kong’s hospitals report that dozens of people had been injured during Monday and Tuesday’s violence.

The months of unrest are now hitting Hong Kong’s economy hard. If that’s the effect the protesters wanted, they should now be happy. The city is already in a recession, the tourism industry is suffering and the property market is jittery with some recent sales showing one one the world’s most expensive real estate markets has lost its sheen.

Over the border in mainland China, state media has responded to the escalating violence with harshly-worded commentary, condemning local politicians and academics for fuelling the demonstrators. Chinese social media, surely some of it state-sponsored, is describing protesters “cockroaches” and “thugs.”

But the territory has been a resilient financial success for more than a century, under Chinese and British rule, weathering many crises and transitions. Leading financial analysts say that there are no companies, yet, intending to move they headquarters from the world famous financial hub.