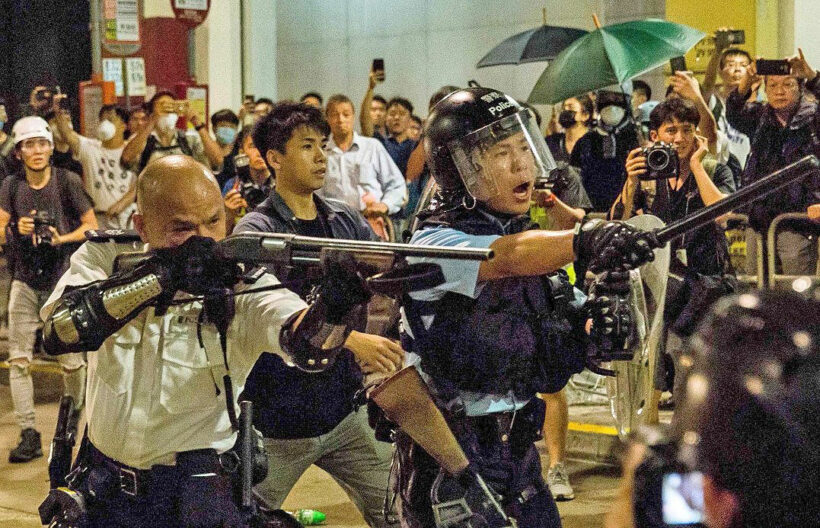 Shortly after a huge military parade in Beijing, celebrating 70 years of communist rule in China, police shot a pro-democracy activist in Hong Kong as protests in the troubled city grew.

Demonstrations have gripped Hong Kong for four months now, but this was the first such injury from a live round and marks a significant escalation in protests that show no signs of ending.

The contrast between scenes in China’s capital and those in Hong Kong could not have been more marked.

AFP reports that while 15,000 Chinese troops saluted the country’s leader, President Xi Jinping, activists in Hong Kong were throwing eggs at his portrait, while ignoring police orders to disperse.

Some protesters even threw rocks and Molotov cocktails, with police using tear gas, water cannon, and rubber bullets in response.

However, one officer unloaded his gun at close range into the chest of one young demonstrator, a moment that was caught on video. The policeman in question maintains that he feared for his life. The man who was shot was taken to hospital, with his condition now reported as stable.

There’s no doubt that events in Hong Kong will have cast a shadow over celebrations in China, where tanks, nuclear missiles and a supersonic drone were showcased in an extravagant parade in the capital, Beijing.

President Xi and senior figures from the Communist Party watched the parade from a podium overlooking Tiananmen Square, scene of the 1989 pro-democracy demonstrations so violently crushed by the government.

Now, they face a similar challenge in Hong Kong but in this digital age, more of the world is watching.

There’s still significant support for the pro-democracy movement in Hong Kong and this represents the most serious threat to Beijing rule since the former British colony was returned to China in 1997.

While the Chinese government continues to do battle with the US in a trade war, and its pork supply has been devastated by African Swine Fever, there’s no doubt that the biggest thorn in its side right now, is Hong Kong.